JENISON – Shepherd senior Amber Gall withstood the elements and pressure to end her tremendous career the way she hoped it would.

Three weather delays – one that delayed the start of the finals until 3 p.m.; the second, a 30-minutes delay, halfway through the meet; and the last one just before the start of the final event (1,600 relay) that pushed the conclusion deeper into the night – caused athletes and officials to pack and unpack throughout much of the day.

The rain, wind and hail didn’t seem to bother Gall, who will attend University of Michigan in the fall on a track scholarship. She won the 800 run as a sophomore and also ran on the winning 3,200 relay that season. Gall finished second in the 800 last season, one hundredth of a second behind Judy Rector of Hanover-Horton, and she and her teammates also placed sixth in the 3,200 relay in 2018.

“Mentally, it takes a toll. Last year I had a good year, not my best. I couldn’t be happier with the way this year has gone. The 800 is probably the toughest to run. It’s the gutsiest. You have to find another gear. For me, my blood pressure drops really fast so I have to do a lot of prerace work.”

As far as strategy, Gall said it all depends on how the race is run. She trailed Freeland at the halfway point before making her move.

Gall spent two minutes immediately following the race talking and consoling her teammate, Amelia Gouin, a sophomore, who finished ninth in the 800.

“I told her she has some big races ahead of her,” Gall said.

Pewamo-Westphalia won its first team title since 2015 and fourth overall as it finished with 45 points. Last season’s co-champion, St. Charles, was second with 37.5 points and Shepherd took third with 35. Scottville Mason County Central was fourth with 31, and Quincy placed fifth with 30. 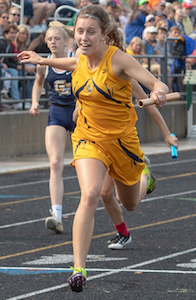 No Pewamo-Westphalia athlete placed first, but two of its relays, in the 800 and 3,200, placed second. The top individual finisher for the Pirates was Sophie Thelen. She placed third in the 100 dash and took fourth in the 200.

Motivation comes in many forms. For Elizabeth Gramza, a senior from Perry, it came from a fellow track athlete on the boys team at Perry.

Gramza did not place in any event last season but took first in the 100-meter hurdles on this afternoon.

She finished second in the Regional and was seeded ninth entering the finals. Seeded No. 1 was Brittany Bowman of Kingsley.

“I was perfectly getting over the hurdles,” Gramza said. “I was going against the top seed in the prelims and I beat her (with a time of 15.90. Bowman ran a 15.91). I felt really comfortable in the prelims. That gave me confidence.”

Gramza’s best finish last season was ninth in the 300 hurdles. Not only did she not score a point in 2018, but Perry as a team did not score.

“We came in to compete,” Gramza said. “I’m not sure what the difference was this year. I was with a very good hurdler (on the boys team) and he’s short. He said he works hard in practice day after day without getting much results. He said he watched me come out (last season) and saw that I just started running well. That flipped my switch. I started working a lot harder, every day in practice.”

Gramza was also scheduled to compete in the pole vault, 300 hurdles and 400 relay. She did well in the pole vault finishing third with a vault of 10 feet, 3 inches. Jael Wood of Scottville Mason County Central took first in that event at 11 feet, 6 inches.

It’s not supposed to be this easy, particularly when one considers Lexus Bargesser of Grass Lake is a freshman.

“That’s my favorite race,” she said of the 200. “I love the energy. You feel yourself, on the run, having all that energy. It’s one of those races, a long sprint that I love. The energy of this meet made me better. I was hoping (to win both). Anything can happen. I was thinking this morning, I can win this.”

Celine Whiren, a junior, ran on both relay teams each of the last two years, and this time she ran anchor on the 800.

“Pewamo-Westphalia was winning when I got the baton,” she said. “Oh, it must have been four or five strides and I just ran my normal race.”

Well worth the wait

Mikayla Williams of St. Charles competed in three field events and in the last one, the long jump, she recorded a personal best of 17 feet, 2 inches to place first. Last year she placed second in the long jump.

“It actually came on my first jump of the (event),” she said. “I jump three events (high jump, pole vault and long jump), and lately I’ve been babying my (left) knee. I jump off my left knee, and today it felt great.”

Williams will attend Wayne State next season and expects to compete in the triple jump and the long jump.

She also played volleyball in the fall. So why risk injuring your knee playing two sports?

“I jump off two knees in volleyball,” she said.

Renae Kutcha of Jackson Lumen Christi said she felt the pressure of winning the 400 dash as a freshman last season. To offset this she decided to work harder, a regiment that included running the 800, to improve her leg strength. It worked.

“Doing the (800) helped me,” Kutcha said. “I wasn’t running well early in the season, and then I remembered that this was my event. So I got my legs stronger, and my times started to go down.”

Byron sophomore thrower Sarah Marvin won both the shot put and discus Saturday, ahead of Caro's runner-up Sheridan Dinsmore in both events. Marvin had taken third in both as a freshman.

PHOTOS: (Top) Shepherd's 3,200 relay, including Amber Gall (second from left), celebrate a win Saturday at Jenison. (Middle) Pewamo-Westphalia breaks past the finish line for more points on the way to winning the team title. (Photos by Annette Tipton. Click to see more from RunMichigan.com.)