HUDSONVILLE – After finishing as runner-up last year, the Traverse City St. Francis girls track and field team did not need any emotional motivation Saturday at the MHSAA Division 4 Final at Baldwin Street Middle School in Hudsonville.

St. Francis got it, anyway. But it came in a painful way.

Senior Kaitlyn Hegewald tore her Achilles tendon in her left foot as she began the third leg of the 800 relay and could not return to action. With Hegewald sidelined, the Gladiators posted three victories and captured their first MHSAA championship in track and field.

“I got the hand-off and took a few steps, and I just couldn’t step on my foot anymore,” Hegewald said while sitting in a golf cart with her left foot wrapped in tape.

St. Francis coach Julie Duffing was watching from across the field and did not realize what had happened.

“I actually thought she got spiked, and then she kept trying to go,” Duffing said. “Coach finally yelled at her to stop, and that’s when she went down. We were expected to win that race, and we were ahead.”

It could have had devastating consequences, but the Gladiators regrouped.

“We had one of our top runners tear her Achilles in the 800,” Buckel said. “I think it broke everyone’s heart.

“She’s a senior. It really kind of dampened the mood because we were hoping to come away with a state title in the beginning, then it kind of gave us a ‘let’s do this for Kaitlyn’ mentality.”

Buckel and Hegewald had a special bond that went beyond teammates.

“Lauren and Kaitlyn have done handoffs together since the seventh grade,” Duffing said.

Buckel’s title in the 400 was especially gratifying as that event has caused her both grief and happiness during her career. In fact, she calls the 400 “my beast.”

“That race has kind of been my beast, kind of something that I’ve struggled with,” she said. “It’s been a challenge for me. I’ve ran it now for nine years, ever since the fourth grade.

“It’s always been such a hard race.”

Duffing has seen first-hand how Buckel has struggled with the event.

“Last year she didn’t want to run it, so we did the whole ‘you’re not running it, and you don’t have to run it,’ thing until she asked me to run it,” Duffing said. “And when she asked, it was hers.

“She’s a beast, and the beast conquered the beast.”

Meanwhile, Bullough broke through in her first MHSAA Final in amazing fashion. She won the 800 by more than 5 seconds and took the 1,600 by more than 10 seconds. She also was runner-up in the 3,200 and anchored the 3,200 relay team that finished second.

“In the mile I was seeded first, and I won that, so it was very exciting,” Bullough said. “It wasn’t as close as I thought it would be, but they still pushed me as hard as I could go. In the 800, I was seeded second by like milliseconds, and that one was very hard – harder than I expected. But in the end I had extra power to pull through, and that’s what I did.”

And Bullough spoke of how the injury to Hegewald affected her during the meet.

“That was heartbreaking,” she said. “She’s a senior and everything, and that just made us so sad. But it also made us want to win more for her.” 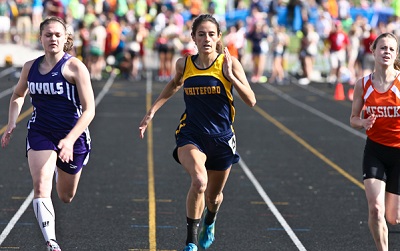 Runner-up Reading, which finished second to Traverse City St. Francis by 14 points, won three events, including the 400 and 1,600 relays. Junior Michelle Davis won the 300 hurdles in 44.92 seconds, breaking the LP Division 4 record of 44.98 set in 2010 by Megan Heffner of Kinde-North Huron. Davis also ran on both winning relays, as did sophomore Jennifer Davis and freshman Sam Pfeiffer.

The other double winner was Miranda Johnson of Ottawa Lake Whiteford, which placed sixth. Johnson, a junior, repeated as champion in the long jump and also won the 200. Johnson broke the LP Division 4 meet record with a leap of 18 feet , 2 ½ inches, topping the previous record of 17-11¾ set by Amanda Weber of Portland St. Patrick in 2004.

Other repeat champions were senior Elizabeth Herriman of Sand Creek in the shot put, junior Addie Schumacher of Beal City in the high jump, senior Chantel Davenport of Athens in the 100 hurdles and junior Kirsten Olling of Breckenridge in the 3,200.

The other champions were junior Jade Madison of New Buffalo in the discus, junior Amanda MacDonald of Coleman in the pole vault and junior Ashley White of Detroit Edison Academy in the 100.