KINGSFORD — The Ishpeming girls carried a heavy workload this season and were rewarded with their second straight Division 2 title at Saturday’s Upper Peninsula Finals.

“The girls got more points than I thought they would,” said Ishpeming coach P.J. Pruett. “When we started the season in the (Superior) Dome meet, we got beat by West Iron County and Hancock. We were able to put kids in the right spots, which was huge. We didn’t have a lot of girls come out for track. Most of them were doing four events.”

“The weather was kind of tough early in the meet, and it effected my breathing,” Swanson said. “Although it’s the same for everybody. I think running with the D-1 kids (in the 1,600 and 3,200; both divisions ran together) may have thrown me off a little.

“We’re excited about being U.P. champions again. We’ve all been working hard. St. Ignace kind of hung with us in the Regional. We’re always worried about them.”

Ishpeming junior Marissa Maino repeated as champion in discus with a school-record toss of 115 feet, 5 inches and shot put at 35 feet. Teammate Libbie Doney won pole vault for the second time in three years with a leap of 8-6. 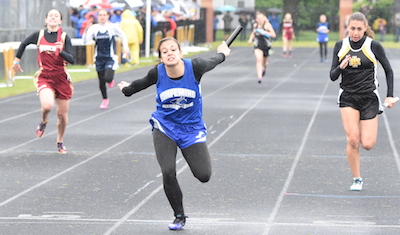 St. Ignace sophomore Linnee Gustafson was a repeat winner in high jump (5-0, she won Division 3 last season) and helped the Saints take third in the 800 relay (2:00.24).

“The girl from Gwinn is good,” Kinner said. “She really gets high in the air. After taking third in long jump, taking first in my other three events was nice. My starts weren’t bad, but your legs aren’t as loose when you run in the rain. It takes longer to get warmed up.”

PHOTOS: (Top) Ishpeming’s Khora Swanson carries the baton during the 3,200 relay. (Middle) The Hematites’ Anna Terres stretches across the finish at the end of the 400 relay. (Photos by Cara Kamps.)