CONCORD – Lindsey Lehman was just 4 years old when the family dog went on a full-speed run – with her trying to hold on – and she did a good job of keeping up with it.

“Those little legs kept up with that dog, and I thought then about how fast she ran across the yard,” Lehman’s mother, Kathy, remembered.

The speed was no mirage. It was an early flash of athletic ability. Lehman, a senior at Concord High School, won the Lower Peninsula Division 4 championship in the 200 last spring and was runner-up in the 100. But running fast isn’t Lehman’s only talent, and it doesn’t nearly tell her story or reflect what is ahead of her athletically.

Lehman has been a three-sport standout at Concord. She is a two-time Jackson Citizen Patriot Player of the Year in volleyball, and last week she signed to play basketball at nearby Spring Arbor University. And, obviously, she’s a track MHSAA Finals champion.

Despite the early flash of speed, track was not an initial priority for Lehman, whose mother is the volleyball coach at Concord. Her father Matt coached boys basketball and now is the principal at the K-8 school.

“Track was kind of an afterthought,” Matt Lehman said. “She really wasn’t that interested in softball, although she did a little bit growing up. It was mainly basketball and volleyball. We kind of convinced her – I was coaching middle school track – and I said, ‘Why don’t you give track a try? It’s a great sport to keep you in shape.’

“She found out she was good at it, and it might have been her best sport.”

Is track her best sport? Possibly. Is it her favorite sport? Well, her answer was, “whatever sport is in season.”

“It was a really difficult decision,” she said. “I’ve played basketball and AAU my entire life, and my dad was a coach and I was a manager, and that was a reason why I wanted to play basketball.

“At Spring Arbor, my parents and the community can come watch me play on the college level. I was looking at the bigger cities, and that’s why I liked Grand Valley. I love Grand Rapids. But I decided to stay close to home.”

Athletics have been a part of Lindsey’s life practically from the day she was born. And her mother says even before that.

“She’s been on the court since I was pregnant with her,” Kathy Lehman said.

Kathy was a very good athlete at Concord some 30 years ago. But Lindsey hasn’t exactly duplicated her mother’s trail.

“It’s been kind of an honor to watch her follow me, but she’s taken her own path,” Kathy Lehman said. “I was a hitter in volleyball, she’s a setter. I was a forward in basketball, she’s a guard. She handles the ball 20 times better than I could ever dream of, and she’s much faster. I played softball, she ran track, so she has laid out her own path, but it’s been nice that it’s at the same school. 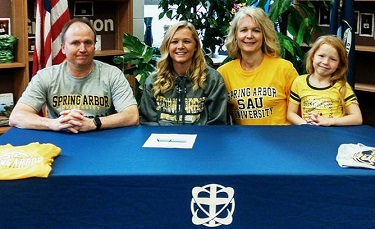 “She is the fifth or sixth generation of Snows (her mother’s maiden name) to graduate from Concord. It’s a tradition that is handed down. Her great-grandfather’s picture is hanging up on the wall, and he played basketball here.”

Lindsey was the rare setter who not only led her team in assists, she also led the team in kills. As a junior, she led the Yellow Jackets to the MHSAA Quarterfinals, and this season, with most of last year’s team absent due to graduation, the team still won its fifth consecutive Big Eight Conference title.

In fact, Lindsey said it was during volleyball season that she had what might have been her proudest moment, even including the championship in track.

“Last year in volleyball, when we beat Bronson,” she said of defeating the eventual Class C champion. “Bronson beat us twice that year, and we beat them the third time. That was a great feeling.

“I like achieving goals on my own, but as a team, it just feels better because you can share it with teammates and friends. This year, we were such a young team in volleyball, and we did so well, and it was a great feeling to watch everybody get better.”

It is hard to imagine that feeling being any better than how she must have felt last spring when she barely edged her good friend to win the Division 4 championship in the 200 after finishing a close second in the 100. The race was so close that the finish was not immediately posted.

“It seemed like it took forever,” Lindsey said. “The both of us really had no idea who had won.”

Lehman’s winning time was 25.92 seconds. Jennifer Davis of Reading also was clocked in 25.92. Lindsey’s mom watched as her daughter paced in anticipation of the announcement of the final result.

“She was going back and forth, and just watching the anticipation and then seeing her face when she realized that she had won was fantastic,” Kathy Lehman said. “Just seeing her face light up at that moment was my proudest moment.”

It had to be especially sweet for Lindsey as she had lost the 100 in a race that was nearly as close as the 200. She was timed in 12.42 seconds, while the MHSAA title went to Mason County Eastern’s Jordan Goodman, who tied the LP Division 4 meet record at 12.40.

This year, Lehman has a goal of not only repeating as champion in the 200 but adding the title in the 100.

“I want to do better than I did last year,” she said. “I probably think more about the race that I lost than the one I won. I don’t like losing.”

Maybe the thought of losing is what drives her. Her parents both spoke highly of her work ethic and desire to be the best she can be.

‘She has always been a hard worker, but she has a drive that she doesn’t like to lose, and if she loses one time, she doesn’t quit,” Kathy Lehman said. “She is going to keep working to get there. Her brother is probably her best incentive because she hated losing anything to her brother.

“Sometimes it would be knock-down, drag-outs, but eventually she would sometimes best her brother. It’s always been a good competition between them.”

Lindsey still has most of the track season ahead of her, but she knows that it might be her last time in the sport. She isn’t sure if she will try to run track as well as play basketball at Spring Arbor. It hasn’t been addressed with the school, and while it has not been ruled out, it certainly is not the priority.

She also has developed a new respect for referees. This past year, Lindsey has served as a referee for sixth-grade games, and it was an enlightening experience.

“Last year, I never said anything, but I got mad at the refs sometimes,” she said, “but this year, I don’t because I know what they are going through. I don’t like being yelled at.”

Although she had plenty of options, Spring Arbor made an offer that was too good to pass up.

“She had a chance to go to a four-year university and not have to pay nearly the amount of money she would have had to pay to go to other universities,” Matt Lehman said. “It’s an opportunity for the rest of her life.

“If someone had said at the beginning of the process that she was going to end up at Spring Arbor to play basketball, I would have said, ‘I’m not sure that would happen.’ I wouldn’t have bet on that.”

The transition to college basketball won’t be easy, but Spring Arbor coach Ryan Frost believes she has what it takes to possibly make an impact as a freshman.

“That is up to her,” he said. “You never know how a kid is going to adjust. She will have some really good seniors to learn the college game from. We have a nice group coming back. We’re excited to get her in the mix for that.

“Athletically she’s a super athlete. She has a lot of skill. She’s a competitor. She fits the mold of what we look for in a guard. She will be very similar to some of the guards we have and our style of play. We press a lot and get up and down the floor. She sees the floor real well as a point guard, and she can score, too.”

And, while her parents would have supported any decision that she made, having her at college just 5 miles away will allow them to attend most of her games.

“It has gone by so fast,” Matt Lehman said. “This is my little girl, my little gym rat who was by my side at practices and huddles with me. She’s graduating from high school and going on to college to play basketball.

“She was a gym rat from the get-go, and more than any of my children when I was coaching basketball, she was in the gym with me. She always wanted to come to practice. She was just 4 or 5, but she always wanted to be a part of it. She always had a ball in her hand, and she did the same thing with Kathy in volleyball.”

Lindsey is a pretty solid student, too, as she has a 3.85 grade point average.

“She’s a 3.85 student because of her work ethic,” Matt Lehman said. “She has balanced everything. She likes sports, she’s a good student, and she’s a good kid. I don’t have to worry about her.

“She’s a smart aleck in a good way, and she’s an easy kid to get along with. She knows how to talk to other students and how to talk to adults. She’s very well-rounded. I’m just proud of her because she didn’t accomplish this because her mom was a coach and her dad was a coach and an administrator. She accomplished it because she has talent and she worked her tail off. That’s on her.”