ADRIAN – Depth is a big thing at Adrian Madison and for its successful girls track & field team.

The Trojans return nearly all of its top performers from last year's runner-up finish in the Lower Peninsula Division 3 meet – when they finished just 3.5 points behind champion Ithaca.

And Adrian Madison is deep in versatility. Many of the track athletes competed on successful teams in cross country, basketball, volleyball and cheerleading – and some of them are doing the dual-sport thing this spring by playing softball as well.

Unlike some coaches at various schools around the state, Powers embraces the dual-sport status of his student-athletes.

“We've had dual-sports here as long as we've had sports here,” Powers said. “It's all about the kids. It happens at many, many schools, and you have to have a little patience and flexibility within the coaches, but it's whatever is best for the kids.

“If the kids can handle it and get their grades, if they are good enough of an athlete, they should be allowed to do both.”

Instead of looking at it like he is sharing his athletes with other coaches, Powers sees the benefits of dual-sport athletes.

“The speed that we are working on should transfer over to a softball player,” he said. “They're running the bases, and we're helping them get faster. And they are learning things over there that should benefit us, like how to keep cool and how to be prepared and focused as you're waiting on a pitch. That should transfer over, too.”

Whatever the reason, it has worked. Madison has won 10 consecutive conference championships in girls track, and last year its depth showed with MHSAA Finals championships in two relay events. The Trojans bagged a third event title with freshman Kaiya Wall in the 100 hurdles.

With all of those champions back except one member of a relay team, there is plenty of optimism at Madison this spring.

“We have some areas to improve on, but we have great depth from the 100, 200, 400 and up to 800 with good field events, and they are quality kids, too,” Powers said. “But our division gets a whole lot tougher this year with the addition of New Lothrop and Saugatuck. I think they were third and fourth in Division 4 last year, and basically they have everybody back this year, so it's going to be a whole lot tougher.”

Every season, Powers has meetings with his captains, who are selected by the athletes on the team. And there is a list of values that are expected of the team captains.

“We have 10 values on a wall, and we go through that with the whole team,” Powers said. “It is what we're looking for and what the captain should be. It's not just who's the coolest or the prettiest. We discuss that with the kids, and we have expectations of the culture and the values that we want to express to people.”

“We talk to the captains and go through leadership roles,” Powers said. “We talk with them about it all the time; how to lead by example and how to bring others alongside instead of barking out orders and to be a line of communication between the team and the coaches. We go over that stuff all the time.

“Our captains are great kids, both athletically and academically.”

Stersic said the transition has been pretty smooth.

“We encourage the team and have little pep talks,” she said. “It's really fun because I remember when I was a freshmen and looked up to the captains, so I think they are looking up to us and thinking they can be a captain one day. It's nice.”

Rosales, Stersic and Sierra Hernandez ran on both MHSAA championship relays last spring: the 800 and 1,600, and that trio ran on the 1,600 relay team that won the Division 3 title in 2015. Benedetta Vianello, an exchange student last school year, also ran on the 800, and she is the only champion from last season that is not back. Chelsea Short also ran on the winning 1,600 relay team.

Rosales also was second in the 300 hurdles last year for the second year in a row, and she won the 400 Finals title as a sophomore in 2015.

“Two years ago, she did back-to-back 400 and 300 hurdles,” Powers said. “Last year, she had a little injury and only ran three events in the state meet. She's back to full strength now, and we're hoping she can make that double again.” 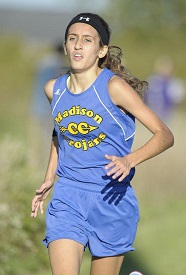 Rosales is one of the many track athletes who compete in other sports.

“I do cross country and basketball,” she said. “Cross country helps me a lot to get in shape and build up my endurance for track. It really helps for the 400 and the 800.”

The other reigning Finals champion for Madison is Wall, who won the 100 hurdles and finished second in the 300 hurdles in 2016.

“She didn't run the high hurdles in middle school, so it was a whole learning experience for her to learn how to three-step and how to do the process of learning the high hurdles,' Powers said. “She picked it up pretty quickly, and she had a great time for a freshman at the state meet.

“It was a great race. She was about fourth or fifth about halfway through the race and came on at the end and had a perfect race.”

Wall said it was sheer will power that pushed her to the Finals win.

“I was just thinking in my head that this was the event that I could win, so I just had to do it,” she said. “It was pretty incredible. It was so overwhelming because at the beginning of the race I was behind. When I crossed the finish line I thought I was second, but they announced that I won, so that was pretty cool.”

“She is very consistent in the high jump,” Powers said. “She's not one who is up and down.”

The string of success is always a good thing at a school, but Powers pointed out that it does come with a certain downside.

“I don't think success always breeds success,” he said. “Sometimes it scares some kids away. They think they're not as good as the No. 1 – “I'll never be as good as that person, so I'll never help the team” – is how they think.

“In reality, when we go to the team state or the league meet, we need the top three, and we need that depth. There are kids in the high school that used to run but don't run anymore. It's too tough. They can't handle not being No. 1. That hurts us a little bit.”

Wall is a perfect example. She ended up winning that Finals titles as a freshman, yet she said she felt a little intimidated joining such a successful team.

“I didn't know I was going to be as successful as I was,” she said. “I was a little intimidated because Megan was all-state every year and Delaney was so good. There was a lot of pressure, but when I started doing good, it just came naturally.

“It's so nice that we're all connected. We're kind of a small school, so we always see each other in the hallways and we know everyone, so it's like a family.”

There is no shortage of instruction at Madison. While it isn't the only school to have as many event coaches, it is not an ordinary situation for most Division 3 schools, either.

“It's a huge benefit,” Powers said of the deep coaching staff, “and it is something that not a lot of schools do. Some of our coaches are part-time guys and we split some salaries, but it's a huge benefit.

“It means I can plan and scheme and work with my sprinters, and I don't have to be running around trying to take care of everybody else. We have every area covered.”

“Most of those coaches have been with us for 10 years or more, and this is my 18th year and 20th overall as I had two years as an assistant,” Powers added.

The athletes seem to love it.

“Coach Gamble did high jump in high school and might have done hurdles, and it's nice to get a second opinion,” Wall said. “Coach P is awesome, and he knows so much, but it's nice to have her for a second coach.”

Stersic said some of the biggest advantages of having so many coaches come during the meets.

“Coach P is always so busy during meets running things, and he doesn't always have time to talk to us, so we have other coaches we can go to when we have questions,” Stersic said. “They pretty much tell us what Coach P would tell us, so that's nice.”

With a bevy of talent and a deep stable of coaches, Madison is primed to make another run at that elusive MHSAA Finals championship.

“It fueled our fire,” Stersic said of last season’s close miss. “We're working hard this year, and we definitely want to win the title.

“I remember the feeling when they said we got second. I knew we were good, but I thought we could have done better, so it definitely helped us to make us work harder.”

Powers is confident in his team, but he certainly isn't making predictions.

“We don't put the cart before the horse,” he said. “We don't think about the state meet because we can't control it. There might be a girl that comes out and high jumps 6 feet, and there are girls that we don't know about. There are freshmen who are elite talents, and there are other divisions.

“We don't worry about that. We are going to control what we can control and work hard and take one day at a time.”

But there is one thing he will boast without hesitation, and that is the type of character shown by his student-athletes. He also coaches the boys team, and he mixes the two together.

Powers also said those separate teams can feed off each other.

“When you have two good teams, it works out really well,” he said. “But when you have one good team and one that is struggling, they will typically follow in the leadership values of the successful team.

“This is a great academic school. We've had team academic all-state the past two years for the boys and girls. They are great kids who are hard-working, and they respect the game. They respect the sport of track and field, and they try to represent not just our school but our conference and our county. They understand the big picture.”

PHOTOS: (Top) Kaiya Wall leads the pack during a hurdles race. (Middle) Megan Rosales, during a cross country race in the fall. (Photos courtesy of the Adrian Daily Telegram.)