The Marquette Redettes proved they're the Upper Peninsula's best girls track and field team beyond any shadow of a doubt Saturday, claiming their third straight Division 1 title with 145 points.

"We had a (triangular) meet in Escanaba on Tuesday, and it worked out well," said Marquette coach John Peterson. "I think it helped us keep our competitive edge."

Her effort in the 800 also was a school record.

"Three U.P. records in one day is pretty amazing," Peterson said. "Shayla Huebner running a 59-second quarter is also an excellent performance. We had so many kids do well today. They responded to every challenge in their way. This was just a fun day to see them compete." 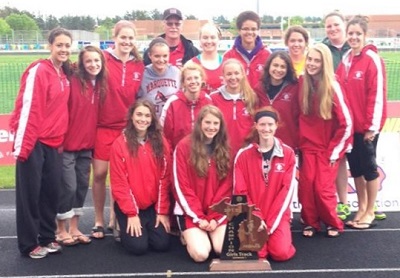 "I felt great today," Rudden said. "Although I was also real nervous after what happened in the U.P. Cross Country Finals last fall. I have great teammates who will lift you when you're down. We all support and push each other. In the 3,200 relay, all the girls gave it their all. We were just nine seconds off the U.P. record."

Rudden, who went undefeated in all three distance events this spring, also was unbeaten going into the Cross Country Finals.

On that day, she was well ahead of the field with a half mile left in the 3.1-mile race at Munising when she became dehydrated, passed out and needed to be helped off the course.

"I'm realizing I need to become more serious about my running," Rudden said. "I need to be more focused. There's more pressure as it gets later in the season, especially when you're undefeated."

"Marquette is getting some points in the field events," Peterson said. "It's so much fun to see the kids when they start in the spring and see how far they come. You can't beat the U.P. Finals. This is the best athletic event in the U.P., bar none."

PHOTOS: (Top) Marquette freshman Lindsey Rudden leads the pack during one of her three record-setting races Saturday. (Middle) The Redettes pose with their championship trophy after a third-straight Finals win. (Photos courtesy of Marquette High School.)