KINGSFORD — The Marquette High School girls have dominated their competition throughout this track and field season.

“This was a great day for our whole team,” said Marquette coach Natalie Messano. “I’m real proud of their effort. I was a little nervous at first about the weather, but the girls didn’t let it get to them. We have an excellent program and (former coach) John Peterson did a great job building it. It’s going to be hard to lose our seniors, but we have a lot of strong juniors coming up.”

“I was a little slow today,” said Rudden, who set the U.P. 1,600 record at 4:55.28 two years ago as a sophomore. “It felt like I pushed hard. I’m pleased with the victories, but I’m definitely disappointed I didn’t break five (minutes) in the 1,600. Although, it’s still fun. A lot of our girls qualified, and I’m happy our team did so well.”

“I think our handoffs went well, and we still have pretty solid times after losing Shayla (Huebner) to graduation last year,” said Blowers. “This is a real emotional day. It’s hard to believe it’s over.” 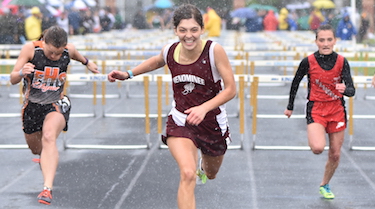 “My times improved a lot from last year,” said James. “My first 200 in the hurdles was solid, then I really had to fight through the last 100. I have to give credit to my opponents, too. That’s a tough race. Early in the meet, it was hard to stay warm with all the rain we were getting. We had to wear a lot of layers.”

James was followed by Marquette’s Jacquie Cammarata in 48 seconds flat and the Redettes’ Hannah Detmers (48.11) in the 300 hurdles.

“I felt pretty good,” said Plutchak, who finished with three straight victories in the 100s. “I hadn’t practiced all week because of my hip, but I felt the whole thing went well. My goal was to not hit any hurdles. I had kind of a mental block before the Regionals. I needed to get a few wins to get my confidence up.”