BYRON — In a bare-bones weight room that appears more like a garage to passers-by, Sarah Marvin is working to finish her quest to rewrite the record books in the shot put for girls track & field.

Not just in the Lower Peninsula’s Division 3, in which she won Finals titles in both the shot put and discus in 2019, but for all divisions.

Marvin, who has a track scholarship to the University of Michigan, has had 11 throws this season beyond the LPD3 Finals record of 46 feet, 9 inches, set by Becky Breish of Edwardsburg in 2001.

She twice has surpassed the all-Finals record of 49 feet, 11.75 inches set by Division 1’s Corinne Jemison of East Kentwood in 2018 – the first time during last summer’s National Scholastic Athletic Foundation’s virtual meet, and then again May 26 at a meet in Comstock Park with a throw of 50 feet, 9 inches.

“Throwing is so technical,” she said, “and you have those days where you’re just clicking and firing on all cylinders. I think I’ll be close to being there soon in these few meets I have left.”

It starts with the Division 3 Finals on Saturday at Jenison.

Marvin and her fraternal twin sister, Becky (a strong thrower in her own right) are familiar with the Jenison layout, which was the site of the 2019 Division 3 Finals.

“We’ll get there Friday,” Marvin said. “We like to go to the throwing rings and feel it out, get a good dinner, then stay at a hotel so we don’t have to ride for an hour and a half in a car (before the competition).”

Throwing is a sport that comes naturally to the Marvins, both for the twins, their sister Jessica and their mother, Theresa, who competed at Michigan after winning two state titles in the discus for Byron during the 1990s.

“Their older sister (Jessica) and brother T.J.) did AAU, which isn’t as big here, but is in the Detroit area,” Theresa Marvin said. “We started a club and had kids that weren’t ours on the team as well. It was a lot of fun for us. Other families were doing T-ball and soccer, and we were doing track.”

The Marvins installed a pair of throwing rings on their property about a decade ago, and the twins picked it up from there. The family took its vacations at AAU national meets, driving all over the country.

Both of the Marvin twins (Sarah is two minutes older, Becky an inch taller) played multiple sports at Byron. Becky also ran cross country and played basketball and wrestled, while Sarah was a starting offensive lineman on the Byron JV football team and did some wrestling in addition to playing basketball, where she was a three-time Owosso Argus-Press Player of the Year.

After her junior year, Sarah gave up football and wrestling.

“I had switched my (shot put) technique to rotational, and I needed more time, more months that I could devote to throwing,” she said. “I tried to train and throw during football season, but I was just too physically tired to do it the way you need to do it. I decided to put my effort and time into throwing.”

As she mentioned, Marvin had switched her throwing from a glide technique, where one effectively pushes the shot in the throw, to the rotational, where the shot comes out like it is slung.

Certainly the results have been there. All of Marvin’s throws this season have been well beyond the 44-11.5 she threw to win at the 2019 Finals. 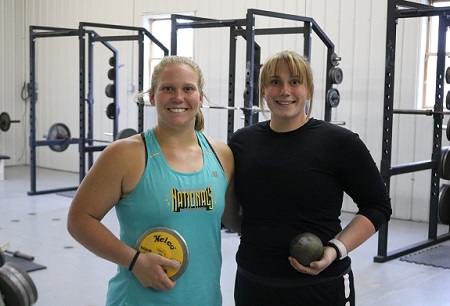 “It’s helped me make a big improvement,” she said. “But we knew that it would.”

But Sarah Marvin also has a key element in her makeup that has spurred her success.

Asked what she thinks makes her sister stand out, Becky Marvin said, “her work ethic, for sure. She’s always working harder than everyone else. She’ll go out and lift without me sometimes. She has talent, for sure, but her drive makes her stand out.”

During last year’s pandemic, the Marvin sisters were without a place to work out after Byron High School closed.

“We got online and on Facebook Marketplace and put the word out,” Theresa Marvin said. “People gave us stuff, and we made an at-home weight room in our barn.”

Their sister Jessica, who competes at Northwood University, came home along with her boyfriend, who like Jessica is a thrower at Northwood. They all worked out.

“It was a houseful,” said Theresa, a mother of six.

Theresa Marvin realized early on that her twins would need more specialized coaching than what she could provide, and for the last couple of years they have worked with Dane Miller, a private coach based in Fleetwood, Pa.

“I do still coach them at meets, and I try to facilitate what Dane’s trying to do,” said Marvin, who also coached her daughters on the Byron varsity girls basketball team the last two years.

Speaking of basketball, the extension of the season into late March cut into the Marvins’ training time for track.

“Her strength levels go down in basketball from all the running,” Theresa Marvin said of Sarah. “It took her a good 4-6 weeks to get back to speed, and I don’t think she’s there yet. Last year, she didn’t peak until mid-July.”

The Marvin sisters, whom Byron girls track coach Byron Schartzer calls “The Wonder Twins,” feed off each other in competition.

“Just to have another person to hold you accountable to train with definitely helps,” Sarah said.

And while they’re serious about their sport, they also keep things light-hearted.

“If I throw big, she throws big, sometimes,” Becky said. “I made fun of her at the Comstock Park meet; I fouled on my first throw and made the second.

“Then she fouled on her first throw and made the second, and I’m like, ‘OK, you can just copy me, then,’” she added, chuckling. “But if one of us hits a big throw, we try to drive off that.”

While there are other amateur meets later this month, the Marvins have their attention set on Saturday’s Finals.

In the shot put, Sarah Marvin has the top throw this season entering the week, but Becky Marvin is in the top 10, seventh in a pack where spots 3-8 are within 21 inches.

Sarah also is ranked No. 1 in the discus, while Becky is ranked sixth.

“They’re both having great seasons,” Theresa Marvin said. “But you never know. You just can’t take anything for granted. We focus on being healthy, being ready to peak, and then being ready to go on that day.”

And then, before they know it, the twins will be separated. Sarah is going to Michigan to study movement science with an eye toward, perhaps, a medical career.

Becky is going to Tiffin University, where she plans to compete on the track team while pursuing a business degree.

It’s family, after all, that Sarah cherishes the most about her athletic career.

“I can’t imagine where I would have been in my sports, or my success in sports, without my family,” she said. “In basketball, it was my older sister playing. My three brothers are all wrestlers. I have huge family support and a huge extended family that comes to all my games. They’ve all grown up playing sports, and it’s just fun.”

PHOTOS: Byron senior Sarah Marvin shows her shot put form; she’s the reigning Division 3 champion in the event. (Middle) Sarah and twin sister Becky Marvin are workout partners and make up one of the top throwing pairs in the state again this spring. (Photos by Tim Robinson.)