By Brian Spencer
Second Half

Norway senior Dani Gagne might not be a familiar name among the Lower Peninsula track and field community. But in the Upper Peninsula, she's built a legacy that will be talked about for years to come.

What sort of camps did you attend to get your times down?

I only went to one camp, and that was in 2009. The camp was held at the University of Michigan. They gave us pointers on good technique, how to move your hands when running, and how to get a good start from the blocks. I found that the advice that I got from the blocks was most worthwhile and helped me this past season the most.

What was the best advice you’ve received to help you reach the success that you have with track?

Well, there was this one guy (track coach from Loyola), who said I should look at everybody else as if they were in my race, and to visualize owning the race; make the race my own to win or lose.

What other colleges were you thinking of and how did you decide to go to Hillsdale?

I was looking at schools like Michigan Tech and Lake Superior State for track. I am glad that I decided on Hillsdale, though, and am excited for the experience to begin.

Who’s your favorite athlete and why?

Well, I’ve never thought about this much, but if I had to choose, Lori (Lolo) Jones is probably my favorite athlete. She’s a good runner. (Jones is a U.S. Olympian and was an NCAA champion hurdler at Louisiana State University).

How much did your back injury affect your events?

I suffered from an SI (sacroiliac) joint discomfort. It wasn’t a terrible injury, however, I did notice it a little bit when I ran. I noticed it more when I did the long jump. Jumping wasn’t terrible, but when I hit the sand, that’s when I was reminded that my back was uncomfortable the most.

What are you going to study at Hillsdale? 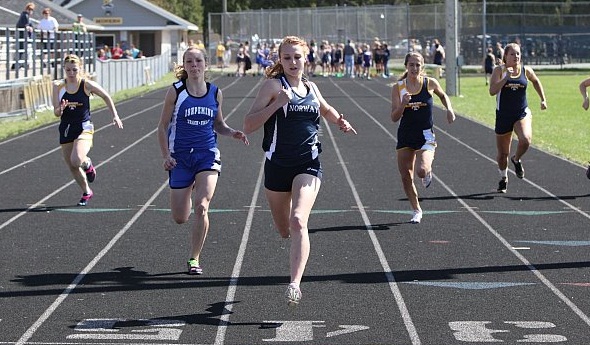 PHOTO courtesy of the Gagne family.