HUDSONVILLE – It might not be the most talented team from a program that has dominated small-school girls track for nearly a decade.

But this year's Fowler team ranks among the best in terms of motivation.

It took a first place in the final event of Saturday's Lower Peninsula Division 4 Finals, but the Eagles successfully repeated as meet champions with a narrow eight-point win over runner-up Pittsford at blustery Baldwin Middle School. The title was Fowler's third in four years and fifth since 2011.

The difference between the latest championship and the previous four wasn't necessarily about talent, coach Jill Feldpausch said. It was more about motivation.

"We are a very motivated team," Feldpausch said following a wild meet that included three weather delays totaling more than five hours. "We're always a target, but winning the state title was our goal. We knew it wouldn't come easy, but it's one of the most hard-working teams we've had."

Fowler finished with only two first places, both by Alyssa Vandegriff, but added three seconds, a third and two fourths.

Vandegriff won her second consecutive 100-meter hurdles title (15.17) and also took first in the high jump (5-2). She said her expectations for back-to-back titles is much the same pressure as what her teammates faced.

"It's probably harder the second time. There is pressure on you to keep things up," said Vandegriff, who was second in the 100 hurdles as a sophomore and will run at Central Michigan University next spring. "A lot of it depends on the competition, and it fluctuates. Sometimes you wake up and you're just not feeling it." 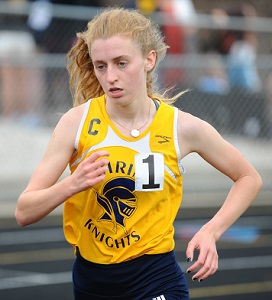 Feldpausch said the stick-out feature of this team was that the girls picked each other up.

"Every team is special, and we haven't gotten everything we've wanted," she said. "That comes and goes with teams. But with this team, someone is always picking up someone else. We had 11 girls run today, but there were 20 on the bus."

Other field event winners were Lyndsi Wolfe of Fulton in the discus, Frankfort's Tara Townsend in the pole vault, Maggie Stevenson of East Jordan in the shot and Ally McLouth of Addison in the long jump.

Other winners were Scout Nelson of Mount Pleasant Sacred Heart in the 800, Annie Laurenz of Breckenridge in the 300 hurdles and Annie Gunderman of Portland St. Patrick in the 400.