ZEELAND – Suenomi Norinh was disappointed when she didn’t qualify for the MHSAA Track & Field Finals as a freshman.

It turned out to be the best thing that ever happened to the Zeeland East standout.

Norinh used it as motivation, and it helped create an inner desire to excel through the remainder of her high school career.

“It definitely opened my eyes to see that I needed to work a little harder at it,” Norinh said. “I think it shaped me into the person I am today.”

And that person is now an accomplished and versatile track star who has won back-to-back Lower Peninsula Division 2 titles in the high jump and is headed to the University of Missouri.

Zeeland East coach Josh Vork said Norinh’s absence from the 2015 Finals was a major turning point in her development.

“She had a really rough day at Regionals that year, and I could tell that really motivated her,” he said. “She wasn’t going to let that happen again, so her sophomore year she came in ready to attack every single practice and not take any days easy.

“Now that she has grown and matured and gotten stronger, she continues to push and push and wants to see the most she can get out of herself.”

Norinh, 18, will compete in her final high school meet next Saturday on her home track at Zeeland.

Norinh hopes to again repeat in the high jump while avenging a pair of narrow losses from a year ago.

“It will be special to be running at home for the last time, and the high jump event means a lot to me,” Norinh said. “I’m going to do everything I can to defend that, but if it’s not meant to be then it’s not meant to be and that’s OK, too. But I really want that one.” 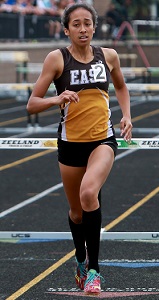 Norinh took second in the long jump last season, as well as in the 100 hurdles. The latter is an event she’s been eyeing since last year’s painstakingly close finish.

She was runner-up in the 100 by the narrowest of margins to South Christian’s Mariel Bruxvoort – Bruxvoort edged Norinh by two thousandths of a second. Norinh also took sixth in the 300 as Bruxvoort, now a senior, won that race as well.

“She’s been looking forward to going against Mariel again this year, and all year she asked me if there were any meets the same as South Christian,” Vork said. “She really wants to go against Mariel, and it will be a good match-up.”

“I kept asking coach if she was going to be at one of our meets because I was excited for some competition. I don’t get that very often.”

Norinh won four Regional championships last weekend in preparation for the Finals as the Chix edged Holland Christian for the overall team title.

Vork said she possesses all the physical abilities, and the work ethic, to cap her career in style.

“She’s incredibly physically gifted, and you don’t get to this point without having great physical tools, but she is, and has always been, the hardest worker on our team,” he said. “Nobody pushes themselves more than Suenomi does, and no one wants to be great more than Suenomi does – and that shows every day at practice.

“There have been days where she asks for more to do at practice because she doesn’t feel like she got a good enough workout, and I think that’s the kind of mentality that creates the champion that she is.”

Norinh’s martial arts background, as well as support from her parents, helped stir her competitiveness.

“I’ve done sports all my life, and my parents always drive us to work as hard as we can and give our all in everything,” Norinh said. “Martial arts taught me a lot, and I’m super competitive. No one likes to lose, and if I lose, I’m not going to give it to you easily.”

Norinh will be the catalyst in Zeeland East’s bid to win the team Division 2 championship as well. The Chix finished runner-up to Lansing Waverly by a single point last season.

PHOTOS: (Top) Zeeland East’s Suenomi Norinh clears the bar on the way to repeating as Division 2 high jump champion last spring. (Middle) Norinh sprints toward the finish during the 300 hurdles championship race in 2017. (Click for more from RunMichigan.com.)