TRAVERSE CITY – Can Gaylord’s Casey Korte, despite missing three weeks in May with shin splints, defend her MHSAA Lower Peninsula Division 2 title in the long jump?

In northern Michigan, those four storylines will be among the most compelling Saturday at the MHSAA track & field championships.

The 17-year-old multi-sport athlete has been battling nagging leg injuries the last two seasons, but still won the long jump last June with a leap of 18-0¼.

Shin splints forced Korte to take three weeks off last month. She returned for the Regional and kicked off the rust by winning the long jump (17-01.25) and helping the 800-meter relay team qualify for the MHSAA Finals. 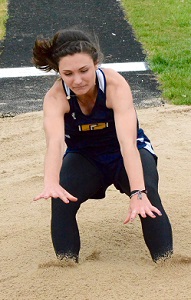 Her distance in the long jump was third best among state Regional performers.

Korte had an interesting warmup Tuesday at Gaylord’s Meet of Champions. She won the 100, high jump and was on the victorious 800-meter relay, but took second in the long jump at 15-5½.

“Usually I don’t do the long jump last,” she said. “I do it second. But the way the meet was set up I did it after all my other events, and after it had rained and gotten cold and windy. My legs wouldn’t let me take off and jump.”

“My goal is to double as a state champion,” she said. “Last year, during long jump, all the factors came together. I was feeling good, the high jump was going well, the wind was perfect. Everything went well. I’m hoping it happens again.”

Korte finished fourth in the high jump at last year’s Finals, but did not qualify in that event this year.

Nonetheless, it’s been a banner senior year for Korte. She was the team Most Valuable Player and an all-region pick in volleyball, then followed it up with a first-team all-state campaign in basketball, averaging 19.8 points, 12.3 rebounds and 3.5 steals per game. Korte signed to attend and play basketball at Cornerstone University.

But her focus now is on the track. And what would it mean to her if she could repeat in the long jump?

“It would show that my hard work paid off,” she said. “A state championship isn’t just handed to you. You have to work hard for it. It would be awesome to know I did that. It’s still surreal that I was the state champion last year. There are times I still can’t believe it.”

Huddleston is preparing for an event-filled day at the Division 3 Finals. The senior is seeded second in the 800, seventh in the 1,600 and eighth in the 3,200. He also runs a leg on Benzie’s 3,200-meter relay, which is seeded third.

His goal? Medal in all four.

His goal? A podium finish in all four events.

“It’s pretty rare (to run four distance races at the Finals), especially if you’re a kid that has a shot to potentially win,” Benzie Central coach Asa Kelly said. “We talked. I said, ‘You’ve got to be a little crazy to do this.’ He said, ‘I want to.’

“He’s one of those exceptional kids that when he does something, he does it really well. He’s a 4.0 student, a salutatorian. I said, ‘You could be one of those rare kids that could be all-state in four distance races.’ That doesn’t happen too often. He’s committed 100 percent to this. It’s going to take a lot of careful planning (Saturday), as far as warming up, cooling down, diet, fluids. I think he’s going to do great.”

Huddleston, who will run at Bradley University, said he’s ready.

“They say it’s crazy to do (four distance races) at state finals, but I like that challenge,” he said. “I’m ready to put forth my best effort and see what I can do.’

Huddleston said he’s most concerned about the quick turnaround between the 800 and 3,200.

“I’m most nervous about that,” he said. “I think there’s only one heat in the girls two-mile at state finals so the turnaround will be quick. But I think I’m in good shape. This is the most fit I’ve ever felt.”

“I was shooting to see how close I could get to the school record of 4:14.7 by Jake Flynn,” Huddleston said. “I fell a little short, but I was running by myself, and running into a wind for half the lap. You take those things away and it puts me right in the ballpark. I was happy with my effort. It’s good to be rolling into the state finals.”

Huddleston smiles when he talks about a second seed in the 800.

“I’ve always looked at myself as a distance runner,” he said. “The two mile has been my best event. But this year I ran a couple open 800s, and I fell in love with it. It’s a strategic race.”

“He knows going in there will be guys who will be fresh,” Kelly said. “What a badge of honor if he could go out there and say, ‘This is my fourth event and I’m going to try and be all-state and beat some guys who haven’t run at all today.’”

Kloss, who was second in the LP Division 4 Cross Country Final, said he’s peaking at the right time.

“With the state meet coming up, it was time to kick it into gear, get motivated, get serious,” he said.

Jeremy is the youngest of four brothers to run for the Rams. His mother, Emily, coaches the girls team.

“I was born in early October and wasn’t even a month old when I went to my first state finals cross country meet,” he said.

His brother Jake ran on the school’s LP Division 4 cross country championship teams in 2002 and 2003.

“It’s the perfect medium,” he said.

And has he received any advice from his older brothers – Jake, Ben and Scott – who will all be in attendance Saturday?

“No, other than ‘Why aren’t you running faster?’” he said with a laugh. 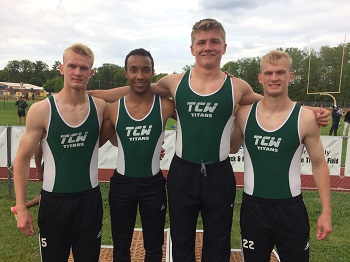 Twins Donovan and Dalton Michael lead off the relay, followed by Lukas Sawusch and Erik LaBonte.  Dalton Michael was the state’s Mr. Soccer in the fall.

“We’re all multi-sport athletes,” LaBonte said. “We’ve been working together the whole (spring). We’re getting better.”

The Titans placed seventh in the relay a year ago, but Donovan Michael is the only returnee. Dalton missed his junior season of track with a dislocated knee. LaBonte was bothered by a hip injury.

But that’s in the past.

“We’re coming into (Saturday) knowing we’re a good team,” Donovan Michael said. “If we have a good day, we could do really well.”

Coach Tom Brown said the Titans will need a school record-breaking performance to be in the hunt. The 42.63 in the Regional tied the school mark.

“I think we’ll have to run in the 41s,” Brown said. “That’s something Rockford did (41.6 at the Michigan Interscholastic Track Coaches Association state team meet last weekend).”

“I think we can go faster,” Sawusch said. “Our handoffs haven’t been great, so we need to work on that this week.”

Focusing on the exchange zone has been a point of emphasis in practice.

“The 4X1 is all about handoffs,” Brown said.

The Titans believe they have the speed.

LaBonte, who also plays football, is the lone underclassmen in the group. Sawusch is headed to Spring Arbor to run track. The Michaels will play soccer at Western Michigan University. Dalton, who earned All-American honors from the National Soccer Coaches Association, became the second Titan to win Mr. Soccer, after Casey Townsend earned the honor in 2006 and 2007. Dalton had 29 goals and eight assists this past fall for West. Donovan added 20 goals and 20 assists.

What would it be like to add a Division 1 championship medal in track to his Mr. Soccer award?