HUDSONVILLE — It was supposed to be the Sekayi Bracey and Anna Jefferson show.

And, to a great extent, it was.

Jefferson led Oak Park to a third straight Lower Peninsula Division 1 team championship and all-division MHSAA Finals records in the 800 and 400 relays. The Knights had 81.5 points, while runner-up Ann Arbor Pioneer had 64.

While Bracey and Jefferson added to their legacies, Northville senior Chloe Abbott upstaged both all-time great Michigan sprinters by beating each of them head-to-head in events they've previously won.

Less than an hour later, Abbott pulled off a double that is extremely difficult under most circumstances, but more so considering her primary competition was going for her fourth MHSAA championship in the event. Yet, Abbott charged from behind to win the 200 in 24.03, while Bracey finished fourth in a race that featured six times of 24.51 seconds or faster.

Not yet worn out from those two exhausting races, Abbott anchored Northville to victory in the 1,600 relay, the final event, giving her three victories in the last six races of the day. She was also on the fourth-place 800 relay team, giving her a hand in 35 of third-place Northville's 50 points.

The first thing Abbott did after winning the 400 was try to forget about it. 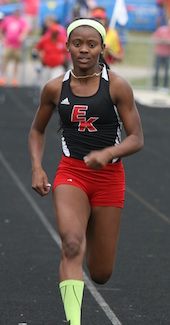 "I talked to my friends," she said. "I relaxed myself a little bit, kind of numbed myself to the 400 zone. If you think about it for a long time, you're like, 'Wow, I did so good in the 400.' You kind of get comfortable with it. I wanted to forget it and focus on the 200. I'm so glad I was able to pull out another win. I'm surprising myself today."

Abbott didn't have the MHSAA Finals pedigree of Bracey or Jefferson.

In 2013, when Bracey and Jefferson were winning championships as freshmen, Abbott was 27th in the 200, her only event that year. She took sixth in the 100 and ninth in the 200 as a sophomore, while helping Northville get two top-three finishes in relays. As a junior, she was third in the 400 and seventh in the 200, adding a third-place finish on the 1,600 relay.

Abbott didn't beat Jefferson in the 400 until last summer, after the high school season.

"Ever since then, I didn't want to get beat by her again," Abbott said. "So, I kept pushing and knew I could do it."

"I never even dreamed of beating Sekayi," Abbott said. "I knew how great she was. She hasn't had a lot of competition all season. I figured she was going to come out and push it today, because she finally has some competition. I was nervous about that, because she's very good. I wanted to make sure I got that out of my head, forget about the people and just focus on my race and what I can control."

Bracey lost in a 200 final only once in her four-year career before Saturday, that coming her freshman year when Rockford's Sammy Cuneo beat her in the Michigan Interscholastic Track Coaches Association Division 1 team championship meet.

"I don't even know what happened," Bracey said. "I was so frustrated when they were all coming up on me. I'm like, 'What's going on?' I never had that in my life. It was confusing."

Abbott and Bracey will be teammates at Purdue University beginning next season.

Bracey won the 100 for the fourth straight year in 12.08 seconds. She won her third long jump title with a leap of 18 feet, 10 inches. She jumped only once in the Finals to preserve herself for her track events. 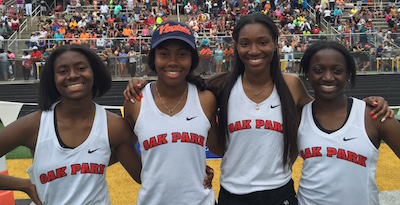 "That was special," Oak Park coach Brandon Jiles said. "We knew we could run fast in the 4x1 and 4x2. It was all about putting it on the track. Those times are the fastest times by far that have been run in the state. For those kids to run that fast, they were really rolling. Everything had paid off, the hard work."

The Knights got off to a shaky start, with Jefferson failing to qualify for the championship race in the 100 hurdles and the 3,200 relay team placing out of the scoring with a ninth-place finish.

"It started out tough, but the kids were resilient and they fought and they showed they could win a tight meet, as opposed to a blowout like the last couple of years," Jiles said.

Oak Park's individual champions were sophomore Dorriann Coleman, who took the 800 in 2:10.20, and senior Brianna Holloway, who set a meet record in the 300 hurdles with a time of 42.71.

Greenville junior Landon Kemp was another of the stars of the meet. The highlight of her day was breaking the all-division Finals record in the pole vault with a leap of 13 feet, 4 inches. She also took second in the long jump at 18-5.5 and fifth in the 100 hurdles in 14.87.

PHOTOS: (Top) Northville's Chloe Abbott takes the lead on the way to one of her two championships Saturday. (Middle) East Kentwood's Sekayi Bracey won the ninth and 10th individual Finals titles of her career. (Below) Oak Park's 800 relay was among significant contributors to the team's overall LP Division 1 championship. (Photos by Carter Sherline and John Brabbs/RunMichigan.com.)