EAST KENTWOOD – Aasia Laurencin crossed the finish line at East Kentwood High School multiple times Saturday, but the sweetest crossing for the Oak Park sophomore came after a race in which she didn’t compete.

Laurencin was the first to greet teammate Dorriann Coleman following the 1,600-meter relay which clinched a Lower Peninsula Division 1 championship for the Knights, their fourth in five years.

“It’s been a long outdoor season, and we finally got the win we’ve been looking for,” Laurencin said. “Last year we didn’t get it, but now it’s all excitement, all joyful tears.”

Oak Park finished with 66 points to claim the title, with Rockford close behind at 59.5. East Kentwood was third with 52 points, followed by Lake Orion with 48 and Northville with 41.

The Knights thrived on the track, especially in the relays, despite losing a runner early in the meet and coming to East Kentwood with just 10. They won the 3,200 relay and 1,600 relay with the team of Coleman, Makayla Gates, Jayla Jones and Mariyah Archibald, and placed second in the 400 relay. Oak Park looked to be on its way to competing for first place in the 800 relay before Jada Roundtree suffered an injury on the anchor leg.

“We really, really showed some grit and toughness,” Oak Park coach Brandon Jiles said. “We really showed that we can win if we don’t have the perfect meet.”

“I wanted to run faster, but it was OK,” said Laurencin, who was second in the 100 hurdles and a member of both sprint relays. “I’m satisfied. I’m really satisfied with today.”

Grace Stark of White Lake Lakeland denied Laurencin a title in the 100 hurdles, and she did it in record-breaking fashion. Stark finished in 13.12 seconds, a Finals record for all divisions. One event later, she doubled her title count, winning the 100 meters in 11.74 seconds. 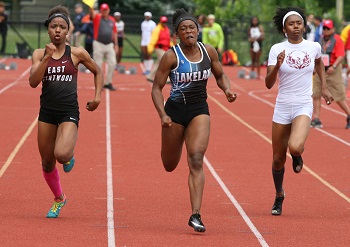 “I really wanted it last year and I missed out, and I was really excited I got to do it here today,” said Stark, who was runner-up in both events a year ago. “I was just hoping to win it. Last year kind of hurt me, and I was upset, but I wanted redemption.”

While Stark and Laurencin had a duel early on, Rockford’s Ericka VanderLende and Ann Arbor Pioneer’s Anne Forsyth had their own in the distance events.

In each race, the other finished second, and in each race, it was VanderLende who took control of the pace. For the 1,600, it worked to perfection.

“I didn’t really want to pay attention to what other people around me were doing,” VanderLende said. “I just wanted to stick to the race plan I knew I was capable of. I normally even split or negative split, so I wasn’t really too surprised that if I took it out hard I could hold it.”

The middle distance events supplied equal drama, as a strong 800-meter field provided a strong race. Waterford Mott’s Katie Osika came out on top, winning in 2:08.88, using a late kick to defeat Hudsonville’s Melanie Helder, who was second at 2:09.28.

“Of course you’ve got that fast time on your mind,” Osika said. “I’m running in New Balance Nationals, so I want to get a good time, but I had to put winning first, like, ‘You have to win state champ first.’ It was definitely tough; it wasn’t easy. This was probably one of the most competitive races I’ve been in all year.”

Lake Orion’s Melissa Symons was used to competition, as Troy’s Lauren Felcher had been pushing her all year in the 300 hurdles. But on the final day of the season, it was Symons, who didn’t run the event a year ago because of injury, who came out on top. As she finished, Symons had a look of shock and excitement on her face, and immediately looked to Felcher, who finished second, and gave her a hug.

“She’s amazing, she’s been my biggest competitor this entire year, and so we were just pushing each other so well throughout this entire year,” Symons said. “I know she’s going to go out strong, so I can just stick with her and then it’s just a battle of the wills at the end to see who can go. I know how she runs, so I think it really does help.”

East Kentwood’s Corrine Jemison set a meet record in the shot put, winning the event with a throw of 49 feet, 11¾ inches. Lansing Waverly’s Malin Smith won the discus with an all-division Finals record throw of 163-9.

PHOTOS: (Top) Oak Park’s Aasia Laurencin, left, surges ahead of Lansing Waverly’s Priscilla Trainor and the rest of the championship heat in the 200 on Saturday. (Middle) Lakeland’s Grace Stark, middle, pulls away for the 100-meter championship. (Click for more from RunMichigan.com.)