Bracey capped off one of the most celebrated careers in MHSAA track & field history Saturday with two more individual championships at the Lower Peninsula Division 1 Finals at Hudsonville. Bracey won the long jump (18 feet, 10 inches) and 100-meter dash (12.08) to give her 10 championships total over her four-season high school career and earn her the Michigan National Guard “Performance of the Week.”

Bracey has come a long way since catching a gym teacher’s attention at elementary school field day and then running her first kids track meet in a leotard and water shoes. The 100 title was her fourth at MHSAA Finals, and the long jump victory – by 4½ inches – was her third straight. Bracey also won the 200 as a freshman, sophomore and junior before finishing fourth this time as that race was won by Northville’s Chloe Abbott, Bracey’s future teammate at Purdue University.

Coach Stephanie Stephenson said: "Sekayi is obviously an exceptional athlete. We will miss her performances during meets, but more than that she is a wonderful person. She is humble and kind. She is very coachable. She has developed great leadership skills over the last four years. She is just a joy to be around. We will miss her presence much more than her performances."

Performance Point: I got out fast (in the 200). I’m the type of person who gets tired, so I try to burn out all my energy completely. I don’t even know what happened. I was so frustrated when they were all coming up on me. I’m like, ‘What’s going on?’ I never had that in my life. It was confusing. … (But) I had a good day, great competition. The 200 was the best competition. Pretty much, I had a great last state meet, honestly. Taking home two state titles is a blessing, even though I wanted better. It was good.”

Great start … great finish: “I didn’t really understand it (when I was a freshman). I was just running. I’m like, ‘Oh yeah, I’m doing good.’ I wasn’t paying attention. I just got state titles. I was just running because it was something I love to do. … (Ten titles) means a lot. I’m just really thankful and grateful for it.” 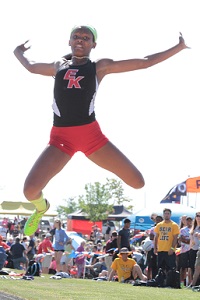 Opponent, now teammate: “(Chloe Abbott) is going to be my roommate. We’re going to Purdue together. We’ve raced our whole lives pretty much. Chloe is a great runner. I’ve seen her become great over time and her fighting through.”

Be the example: “I really started to focus on my grades (in high school), because that’s what was going to get me into the college I wanted to get into. I’m the oldest of all my siblings, and I want to leave an example on the track and academically to show them how important it is.”

Just like Flo Jo: I really look up to Flo Jo (late Olympian Florence Griffith Joyner, who died in 1998), even though she died. I’m inspired by her. I watch her videos all the time, just because she motivates me so much the way she runs. … Long term, my goal is to go to the Olympics. I’m going to work hard to do that. Hopefully in college, with training, I’ll see great improvement.”