The Upper Peninsula track & field community will say good-bye to some memorable standouts during Saturday’s Finals at Kingsford High School – but also welcome the start of what should be some dynamite championship runs over the next four years.

Six past individual champions will be concluding their careers, including UPD1 Finals shot put record holder Emily McLean of Sault Ste. Marie. But many will be watching intently as well as freshman favorites like Lola Korpi of Ishpeming and Danica Shamion of West Iron County make their debuts.

Events begin at 10 a.m. (EDT) and tickets to attend can be purchased online only at GoFan. The meets also will be broadcast on MHSAA.tv and viewable with subscription.

Below is a glance at team contenders and individuals to watch in all three divisions.

Team forecast: Marquette edged Sault Ste. Marie at their Regional and will be looking to add a second-straight Finals championship and 11th over the last 13 seasons. Houghton could be in for a historic finish as well as it has posted only one top-two Finals team placing, coming in as Class C runner-up in 1982. The story is similar for Sault Ste. Marie, which is seeking its first Finals title in this sport since 2001 and last finished among the top two in 2011. Marquette has the top seeds in seven events, but Menominee is right there with five top seeds and Sault Ste. Marie has the depth to match Marquette.

Marquette 400 and 800 relays: Both could make a run at meet records. Truckey anchors a 400 relay with juniors Ava Jones and Maria Millado and sophomore Julia Ott that ran 51.48 at the Regional – and the UPD1 Finals record is 51.22. She anchors Jones, Millado and senior Clarissa Remillard on an 800 relay that ran 1:49.87 at the Regional – with the UPD1 Finals record in that race 1:46.34. 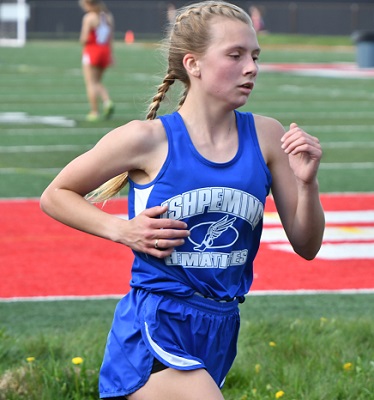 Team forecast: St. Ignace won the last three Division 2 championships before COVID-19 struck last spring, and the Saints this weekend also will be seeking their 10th title over the last 12 seasons (with the 2013 championship coming in UPD3). West Iron county was the champ in 2013 and runner-up in 2014 and 2015, and Ishpeming also is regularly in the mix with back-to-back titles in 2015 and 2016 and the runner-up finish in 2019. The Wykons enter with top seeds in seven events; the Hematites have top seeds in five. The Saints don’t have a top seed but 16 individual entries and all four relays racing.

Rebekah Loman, Ishepming: The Hematites senior won the discus in 2019 with a toss of 104-7 and is top-seeded in that throw this weekend at 106-9. She’s also the second seed in the shot put after finishing fifth in that event as a sophomore.

Team forecast: Lake Linden-Hubbell won three straight championships prior to COVID, and Stephenson could be next up as it seeks its first team title since 1993. The Eagles have 25 individual entries and all four relays running, with sophomore Daisy Grinsteiner and senior Paige Cappaert top seeds in field events. Rapid River has fewer entries but three tops seeds and two second seeds.

Camaryn Crouch, Lake Linden-Hubbell: The pole vault champion as a freshman in 2019 is second-seeded in that event and also will run on the second-seeded 400 relay, and as part of the 800 relay.

Daisy Englund, Rock Mid Peninsula: She was part of two relay champions in 2019 and earned the Division 3 cross country titles this past fall and in 2017. She’s seeded third in the 100 this weekend, first in the 800 (2:34.6), fifth in the long jump and will run on the second-seeded 800 relay.

Jaylyne Lindemann, Baraga: The shot put champion in 2019 as a sophomore will attempt to add another championship in that event and should contend in the discus as well.

PHOTOS: (Top) Marquette's Maria Millado hands off to Clarissa Remillard in the 800 relay during the Marquette County Meet this spring. (Middle) Ishpeming’s Lola Korpi runs the 3,200 at the Marquette meet. (Phots by Cara Kamps.)