KENTWOOD – There was no mistaking the marquee event at Saturday’s Lower Peninsula Division 1 Girls Track and Field Final.

With three of the top girls distance runners in the entire country competing, the 1,600-meter final had the undivided attention of a huge throng at windy, but sunny, East Kentwood High School.

“I saw them coming up on me with 400 meters to go, and I knew I had to pick it up even a little more,” said Hannah Meier, who will run next year at Duke University, along with her sister. “They pushed me and I finally broke 4:40. I’ve been wanting to break that for a long time now.”

The winning time was announced as the sixth-fastest 1,600 meters ever run by a high school girl in the United States.

The epic victory in the 1,600 was one of her four firsts on Saturday for Meier, which powered Grosse Pointe South and Coach Steve Zaranek to their third-consecutive team championship. Meier also won the 800 meters and ran legs on South’s winning 3,200-meter and 1,600-meter relay teams. 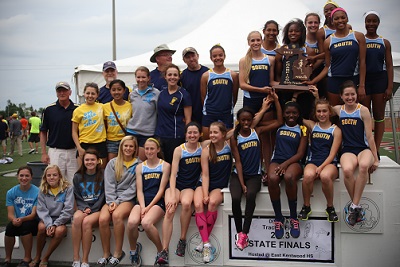 The final showdown between the Meier twins and Finn, who have dominated Michigan girls track and cross country since bursting onto the scene in the fall of 2009, was certainly the main storyline of Saturday’s Division 1 meet. But while fans were saying goodbye to those three distance legends, they got to know a new sprinting sensation.

“I was very confident coming in, and I just tried to visualize each race in my head,” said Bracey just moments after winning her final race of the day, the 200 meters, on her home track. “I feel tired right now, but it was worth it.”

Bracey certainly didn’t run away from the field, having to hold off major challenges from second place Dominique Funchess of Detroit Renaissance in the 100 and Anna Jefferson of Oak Park in the 200. 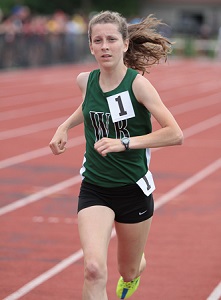 Finn continued her dominance of the longer-distance races by putting on a show in her final high school race, the 3,200 meters. Finn, who will run next year at Michigan, won the race by a whopping 34 seconds – setting an all-division Finals record with a time of 10:08.23.

Finn acknowledged afterward that she was hoping to go sub-10 minutes.

“I went out there with the goal of the 10-minute barrier,” said Finn. “But that’s OK. I set really high goals and try to get close to them.”

Cierra Pryor of Jackson broke her own meet record from a year ago, winning the long jump with a leap of 19-0.5, a half-inch better than the year before.

The Meiers closed out the meet and their storied prep careers in fitting style, powering the Blue Devils to victory in the 1,600-meter relay.

“The most important thing for us today was to win another team state championship for South,” said Haley Meier. “I didn’t feel that great today, but I had to give it all I had for my team. This is a great way to go out.”

Earlier in the day, the Meiers opened the running portion of Saturday’s finals by each running a leg on the winning 3,200-meter relay team in 9:01.98. The other members on that winning team were Ersula Farrow and Christina Firl.

That impressive time was still 13 seconds slower than South’s 2012 winning time of 8:48.29, which is a National Federation of State High School Associations record. That team featured the Meier twins, Farrow and Kelsie Schwartz.