GRAND RAPIDS – Southfield Christian may not have a track, but it has a trophy case.

And after Saturday’s Lower Peninsula Division 4 Finals at Grand Rapids’ Houseman Field, the Eagles have a new piece of hardware to put in it.

With great efficiency, a squad of six athletes collected 62 points for the team title to beat out nearest competitors Fowler (52) and Springport (45). It’s the first track & field championship in school history (the Eagles were second in 2007), and junior Chika Amene left her fingerprints all over it.

Amene won three individual events and ran a leg on the first-place 1,600-meter relay team that set a school record with a time of 4 minutes, 7.37 seconds.

In the 100 prelims, Amene stumbled out of the blocks but still managed to win her heat. She ran a time of 12.71 seconds in the finals to edge Springport’s Katelynn Creger by four hundredths of a second.

Finally, Amene claimed her third sprint title when she crossed the finish in 58.83 in the 400. She helped solidify the team championship along with Rebekah Wilson, Kaelin Ray and Shelby Goodson with a convincing win in the 1,600 relay.

“This year I became more focused, and I became more serious,” Amene said. “I became more eager to win and have more of a fight than I did last year. I started training last summer and the indoor season really helped me improve. I want to do it again next year, defend my titles and improve my times.” 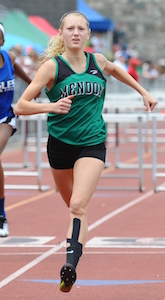 “We weren’t expecting anything close to this,” Amene said. “I know people back at home are very happy.”

Mendon’s Mary Leighton was expecting nothing short of a championship in the 100 hurdles after setting a meet record in her win as a junior in 2016. Not only did she repeat as a senior, her time of 14.89 was again the best performance in Division 4 history. Leighton also had a runner-up finish in the 300 hurdles with a time of 47.52.

“I like warm weather, so I felt good going over the hurdles,” Leighton said. “I’m happy that I got my (personal record) on my last race of my high school career. As for the 300s, I knew that it was going to be a really close race. I’m still proud of my performance. It’s nice to finish strong before I go into collegiate competition (for Indiana Tech). I will always cherish the memories made from track, and I’m proud to say I ran for Mendon.”

Erika Lechner of Harbor Springs ended her prep career on the highest of notes with a Division 4 meet record toss of 44 feet, 1½ inches. She bested Jade Madison’s mark of 43-8¼ set by the former New Buffalo standout in 2014.

The rest of the meet was a free-for-all as Fowler was one of two other teams to win multiple events. Its 400 relay team of McKenzie Feldpausch, Ciera Weber, McKenzie Koenigsknecht and Sidney Horak grabbed the top spot in 51.49 seconds, and teammate Allyssa Vandegriff cleared 5-4 to win the high jump by two inches.

Pittsford senior Maddie Clark crushed the field by over 15 feet with a distance of 137-6 in the discus, and the Wildcats nabbed another title when Katie Clement went 10-6 for a nine-inch victory in the pole vault.