“We have a great group of girls who work well together,” said St. Ignace coach Trudy Olsen. “They came here hungry. They wanted to regain the title. They did amazing. It’s all about them.”

Prior to 2015, the Saints were crowned champions five years in a row, including a Division 3 title in 2013.

St. Ignace junior Linnee Gustafson matched the meet record in high jump at 5 feet, 4 inches, which she shares with Nicole Vanderlin of Norway from 2011 and 2012.

Gustafson’s winning leap also set a school record, an inch higher than her previous best (5-3) from this year’s Regional meet on May 19.

“I’m excited,” she said. "Today my steps felt perfect. It was a relief to set the school record in the Regional. Now I’m mostly competing with myself.”

“It feels good to get the title back.” said Coveyou. “We felt we had a pretty good chance coming in. I think this gives us motivation for next year.”

Classmate Libby Becker held off Iron River West Iron County senior Emmy Kinner for the 800 title. Becker was clocked at 2:27.19, followed by Kinner in a school-record 2:28.02.

“This is very, very, very exciting,” said Becker. “I heard her coming behind me. I was feeling a little pressure, but I turned that pressure into energy. The 800 is a very tough race. The last 200 meters is the most challenging. You get tired, but have to find a way to overcome that.”

“I had never beaten her (Kinner) before,” said Peramaki. “I did not expect that. I knew if I was going to beat Emmy, I needed a good start and I executed that. In long jump, I didn’t jump as far as I usually do, but it still went well. I want to thank my parents (Matt and Ann) for giving me the God-given talent and all the encouragement they gave me. They have helped me so much.”

St. Ignace senior Alysse Bentley, who was runner-up in pole vault at 8-0, described what it was like to jump with Peramaki. 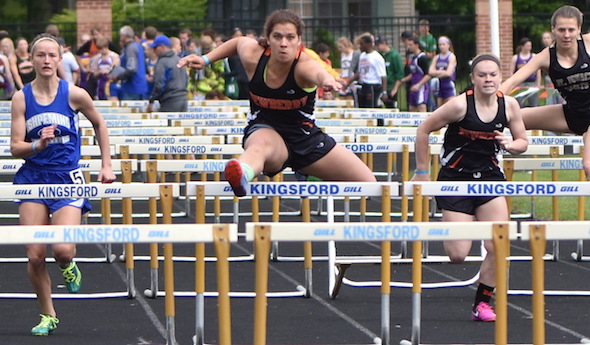 “It’s good competition,” she said. “I knew I was seeded second and just wanted to finish as high as I was seeded. I was impressed with how hard she runs and her swing up. You can tell she puts a lot of time into it.”

Kinner then described how her track career began.

“When I was in eighth grade, I ran track to get out of school,” she said. “Mrs. B (coach Kristi Berutti) saw me running and wanted me to run against some of the high school runners. She believed in me and convinced me to come out. At first I didn’t like it, but it grew on me.”

“My starts were okay,” said Bryant. “It felt good coming out in the hurdles. My start could have been a little better in the 100 dash, but it still went all right.”

PHOTO: (Top) St. Ignace's Linnee Gustafson pushes the pace during the 800 relay. (Middle) Newberry’s Taylor Bryant breaks away on the way to winning the 100 hurdles. (Photo by Cara Kamps.)