ZEELAND – It’s essentially an individual sport, but the importance of teamwork was on display Saturday at the MHSAA Division 2 Girls Track & Field Finals at Zeeland Stadium.

Teammates pushed each other to the end with one-two finishes in the 100- and 1,600-meter races, highlighting a day that had a three-and-a-half-hour delay and then another of 45 minutes – with one more delay of more than two hours for good measure.

“I was trying to run against her, keep up to her, push her, go harder – and it made me go harder,” Madison said. “It’s exciting. I don’t really feel like it’s real. It feels fake, like a dream come true.”

This time, it was junior Gillian Fiene running a 4:57.05 to top second-place Michelle Kuipers, together keeping the Maroons on top of the podium, both noting their faith in a post-race interview.

“I knew I was running it with God and with Michelle, and to know that I have those two walking right alongside me is just such a great feeling and the most comforting thing in the world,” said Fiene, who moved to Holland Christian this year from a school in Illinois.

Added Kuipers: “I don’t feel the pressure as much (from the program’s past success), just more of excitement just to keep going to see what we can do as a team. Just to see how God has blessed us this year even more.”

However, in the team competition, Corunna carried the day with 54 points, while Holland Christian was second with 49. Rounding out the top five were Zeeland East (37), East Grand Rapids (33), and Bridgeport (31). 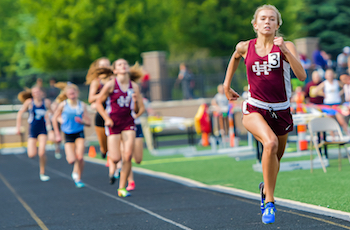 Corunna was carried by a standout day from junior Hannah Hollister, who won individual titles in the 300-meter hurdles (44.12) and 200 meters (25.26). She also anchored a 400-meter relay winner in which Corunna (49.56) edged Frankenmuth by one hundredth of a second, coming from behind for the win.

Hollister said she ran the full slate of events last week at the Regional to prepare for what turned out to be a long day.

“It was kind of hard to bounce back from running the 200 prelims and then 15 minutes later in the 100 hurdles, so I’m happy with how that went,” Hollister said. "At the beginning, it was a little rough with all the nerves and not being able to run our first race, but then after that, it was almost nice and it gave us a longer break.”

“I was going for 19 (feet),” Day’Anna said. “But I’m happy that I could jump this and beat the state record. My last couple jumps in my last couple meets were really good, so once I got to state meet, I was just working my way up to this.”

Day’Anna said her second-place finish in the long jump last season served as motivation throughout this spring.

On the track, senior Jakarri Alven of Grand Rapids Catholic Central won the 400 meters at 57.55 seconds, her third Finals title in four seasons and after missing last season’s championship meet with an injury.

Eighth-seeded East Grand Rapids pulled an upset in the 3,200 relay, winning at 9:15.00 to edge top-seeded Holland Christian, which set the meet record last year. Holland Christian took second this year at 9:21.15 after its third runner was hobbled with an injury down the stretch.

PHOTOS: (Top) Corunna's Hannah Hollister clears a hurdle while leading her team to the LP Division 2 championship. (Middle) Holland Christian's Gillian Fiene paces the field on the way to a win. (Photos by Kevin Fowler. Click to see more from RunMichigan.com.)