This year, all eyes were on her.

As the reigning champion in the 100 and 200-meter dashes, the Sanford Meridian senior knew everyone at this year's Finals on Saturday, again at Comstock Park, wanted to dethrone here.

"It is a little harder to defend, because last year was my first year in track and no one knew who I was," said Stockford, who will be continuing her career at Saginaw Valley State University on a full scholarship. "This year I had the target on my back, and I don't know if I liked that. But I knew I was capable of dealing with it."

Those might have been the last of a long list of defenses for Stockford, but she started running track only last year as she also was a star on her school's softball team.

But her speed could not be ignored.

"In gym class, I ran the 40-yard dash and had a good time, and my coach, Mike Bilina, said I should really go out for track," Stockford said. "I played softball, but decided it was a good idea, and went out. Glad I did; it paid off."

Stockford's were two of many great performances on a perfect day for track and field. But collectively as a group, the day belonged to Ithaca, which won its first MHSAA team title in the sport with  a score of 57.5 points, 3.5 more than runner-up Adrian Madison.

"Our goal coming in was to win," Ithaca coach Gene Lebron said "We scored 38 points last year and finished in fourth, and we didn't lose anybody. I am so proud of these girls, and so proud of the work they put in." 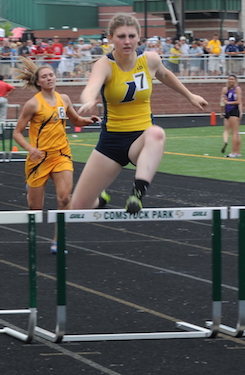 Ithaca was led to its title by senior Erica Sheahan, who repeated in the long jump with a leap of 17-10.25.

When talking about the Bullough family of Traverse City, a word that comes to mind is toughness.

That was never so true than Saturday, as St. Francis' Holly Bullough, younger sister of Max, Byron and Riley Bullough – who all played, or are now playing, football for Michigan State University – ran with a stress fracture in her left foot.

With a foot that requires a walking boot when she is not competing, Bullough won the 1,600 with a meet record time of 4 minutes, 52.63 seconds.

"When I run, it's not as bad, but it really hurts after," said Bullough, who will be joining Byron and Riley at MSU this fall. "I felt good today. I haven't had a meet in a week and a half, so I have just been cross training. Today I just needed to get back into a rhythm."

Clare's Kasey Staley had a busy 10 minutes in her Finals events, as she ran for her team's 800-meter relay team that set a new school record of 1:46.91 and took third, and then came back to win the pole vault with a vault of 12 feet, 4 inches – a new meet record.

"The adrenaline was pumping," said Staley, a junior. "I did feel nervous because I just ran in the relay and came back to the pit. I made 11-8, and then went for 12-4 and when I made it on my second jump, it was the greatest feeling in the world."