Well, grounded except when she’s tracking her speed down the runway, then hurtling her 5-foot-5 frame into the air to clear a bar in the pole vault.

It’s an event in which she’s become quite accomplished. In a meet last Thursday at Harbor Springs, the Boyne City senior broke her own school record three times, clearing 11-6, 11-9 and finally 12 feet.

Harmeling is now the fourth vaulter in the state, and the first in Lower Peninsula Division 3, to clear 12 feet this weather-abbreviated season, according to athletic.net.

“Going for four PRs in a day is tough – she almost had 12-4,” Ramblers pole vault coach Andy Bryant said. “It’s an emotional rollercoaster. You’re celebrating one jump, but then you have to quickly re-focus for the next.”

That breakout afternoon was a confidence builder for Harmeling, who admittedly has struggled adjusting to a bigger 13-foot pole. She went 11-1 a year ago to break Katie Martin’s school record, but then had trouble finishing jumps and exceeding that height, including during the indoor season, as she tried to transition to the new pole.

“I was stuck there for almost a year,” she said.

Then, the Ram Scram at Harbor Springs happened.

“She’s finally getting comfortable with the longer pole,” head coach Andy Place said. “We’re excited for her. It’s been an adjustment. You need a longer pole to go higher, but you have to adjust your steps, and when to bend the pole. There’s a technique to it.”

Even at Harbor Springs, Harmeling reverted to her old pole to clear 10-6.

“Then, (Bryant) said, ‘OK, you’re going back to the new pole,’” Anna’s mother Andrea said. “It just clicked for her after that.”

“I had to apologize to Anna afterwards,” Bryant said. “I didn’t celebrate that much when she went 11-6 and 11-9 because I knew she was going to make 12.

“I told her when she changed (poles) she had to be patient. The timing is different. It’s hard to jump from one pole to another. But I knew once she started to get it down, the heights would come - and it finally happened. It’s a lot of stress off her shoulders now. She knows she can do it. Now, it’s working on the technical things that college vaulters work on.”

Harmeling said with better technique she could have cleared 12-4 that day.

“I had the height, but I need to work on tightening my form to keep pushing that record up,” she said.

How high can she jump? She doesn’t know.

“I don’t know what my limits are,” she said. “I don’t think I’ve reached my peak. There’s more to learn. And I’m going to keep trying until I hit those limits, which is hopefully never.” 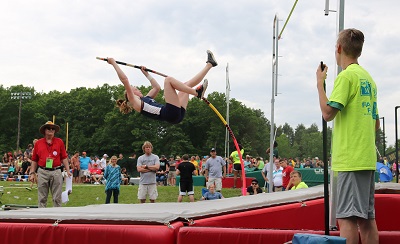 It’s been an interesting journey for the Stanford-bound Harmeling – and Bryant, who recruited her as a freshman.

Since few athletes gravitate to pole vaulting, Bryant, a science teacher at the high school, looks for students who are athletic and coachable.

This was an exception: Harmeling was not an athlete.

But Bryant, who had her in class, saw potential.

“Physically, I probably wouldn’t have approached her,” he said. “She was a teeny little freshman who had never played sports. But I saw her determination in the classroom, how she attacked her academics. I thought let’s give this a try. She’s a clean slate. She has no bad habits (from playing other sports).”

Bryant, who has been coaching the sport 20-plus years, had to not only convince Anna, but her parents Mike and Andrea, too.

“We went to a parent-teacher conference and met with the science teacher,” Andrea recalled. “My husband and I are doctors, so we’re science people. We were excited about the conference. Andy Bryant was her science teacher. When we walked in he said, ‘Yeah, yeah, yeah, she’s good. She’s fine with science. Now, has she chosen a sport?’ My husband and I looked at him and said we’re not really sports people. I said we think of math as a sport.”

“That’s part of why Anna wanted to try it – to prove to us math wasn’t the only sport,” added Mike, laughing.

“(Bryant) said he thought she would be really good at pole vaulting. It sounded interesting, so we said, ‘Sure, why not, let her try.’”

Pole vaulting is not an easy event to learn. Anna quickly found that out.

Boyne City has a vault box in its gymnasium floor so vaulters can work on their craft during the offseason. Training sessions typically draw vaulters from across the region, who come to train with Bryant, a former vaulter at Central Michigan University.

It’s also a testing ground for new vaulters to see if they will like it before spring practice begins.

Harmeling, however, had research to do first.

“I had to look it up online and watch a video,” she acknowledged. “I didn’t understand the concept. That first day wasn’t good at all. I had no idea what I was doing. I was terrified trying my first jump. But, I thought, I can’t end it on a bad day. I, at least, have to do well enough before I quit.”

“That first practice I ran her through some preliminary drills, and she just floored me,” he said. “I remember telling my wife I haven’t been this excited about a kid in a long time. She’s not only coachable, she’s smart.

“When you meet her, you can see that determination in her eyes. I could tell the first week of school (her freshman year). She is a kid who will find a way to get more out of an assignment, more out of a question, than you intended. You ask any teacher and they’ll say she challenges you in a good way. You put something in front of her and she’ll make it better. She’s always pushing that limit. That’s the quality I zeroed in on.”

Harmeling tackled pole vaulting like she does her classwork – with a vengeance. If she wasn’t practicing or working on plyometrics, she was in the weight room gaining strength.

“A lot of young athletes today want the quick hit,” Bryant said. “They want to be No. 1 with minimal work. It’s so refreshing to see a kid work her tail off to reach her goals. In season, out of season, she’s there. Now, she has a great chance to win at the state meet.”

It took one year to make her way on to Bryant’s classroom wall, where he posts pictures of vaulters. He started with collegiate and world class vaulters, but he’s gradually replaced those with his own jumpers. The standards: Boys must jump at least 12 feet, girls 10.

“He told me, ‘If you jump high, I’ll put your picture up here, but you have to work hard,” Harmeling said.

Bryant started the board to attract interest in the discipline.

“Kids look at the wall and begin to understand what it’s all about,” he said. “Then they’ll say, ‘What’s the story here?’ That’s the hook. That’s when I say, ‘Want to try it?”

Today, Harmeling, a team leader, owns the school record that Martin, a 2004 MHSAA champion, had previously set at 11 feet.

“I thought that record would stand for a while, and it did,” Bryant said. “But as soon as I saw Anna as a freshman I remember telling her parents when they were trying to understand what pole vaulting was about that if Anna doesn’t challenge for a state title, there’s something wrong with my program. That’s the kind of kid she is. If you want to know how good your program is, you put Anna through it, and you’ll find out because this kid does everything you ask.”

Harmeling is also the lead runner on the 400 relay, and Tuesday in the Boyne City Invitational she tried the long jump for the first time after the pole vault was cancelled due to strong winds.

“She has never long jumped and had not practiced it,” Place said. “She used her pole vault approach … and won the event with a jump of 15-6, which makes her one of Boyne City’s top four jumpers ever. A 15-9 is the MHSAA state qualifying mark in Division 3, so after some practice we may have her jump again.”

Off the track, Harmeling, who carries a 4.048 grade points average, excels in other curriculars, too. She was the technical director for the Rambler Sports Network, which broadcasts football, basketball and volleyball games online. She was a section leader for the Rambler Rowdies, one of three finalists for the MHSAA Battle of the Fans VII championship. She was a state champion in a DECA business competition that qualified her for the international career development conference. And she plays stand-up bass in the family band that performs around the area.

“That’s kind of who she is,” Andrea said. “She’s not afraid to try new things – and when she does she goes all out. It’s been fun to watch. We would not have predicted any of these things for her when she started high school. She starts them, loves them and she’s good at them.”

That’s what happened when she needed to pick up some arts credits and came across a TV production class.

Bryant is a broadcaster during basketball season and works closely with Harmeling. 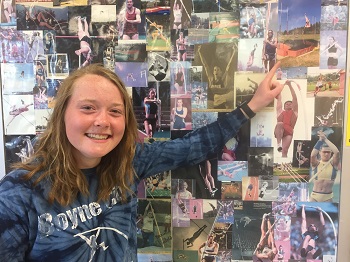 “She sits in the truck with all the TVs and camera angles (usually four cameras) coming into that feed, and she is the one picking out the camera shot, talking in my ear when to go to replay, when to go to commercial. She’s coaching me.

“I told her teacher, if you take her, she’ll be running this thing in a year. And she was.”

“I loved it,” Harmeling said. “I’m still part of the program now. I’m helping edit a final senior year video. It’s such an interesting platform to be part of because it’s so high-paced. I got to work with great people. It’s so interesting to learn the people side – figure out what the viewer wants to see, how things should be visually organized – and the technical side of programming. It’s like a puzzle.’

As for the family band, Mike is a banjo player in the Horton Creek Bluegrass Band. He also plays in the family band with Anna (stand-up bass), Katie (fiddle), Megan (guitar) and Ben (guitar).

Katie, a junior, and Megan, a freshman, play on the Ramblers soccer team. Ben, a seventh-grader, also plays soccer.

Anna, after posting a 1550 out of 1600 on the SAT, is off to Stanford in the fall. She also was accepted at Harvard. The Harmelings visited Stanford in February.

“I loved the people, the campus, the academics,” Anna said. “It was amazing. It became my dream school.”

Plus, it had something Harvard couldn’t offer in the winter – warm weather.

Harmeling has touched base with the Stanford track coaches about the possibility of walking on. That didn’t seem too promising until she cleared 12 feet last week.

“They told her to keep them posted so when she popped 12 one of the first things she said is, ‘I’ve got to send the Stanford coach an e-mail,’” Bryant said. “I don’t know if there’s a coach in the country that wouldn’t take a 12-foot walk-on.”

If it happens, it would be awesome, Harmeling said. If not, academics will keep her busy and she’s interested in contacting the school’s broadcasting program, too.

“I would love to work in sports broadcasting,” she said.

There’s so much in the air right now, including how high she can go in the pole vault.

“Fingers crossed at this point,” she said. “I’m just trying to have fun and see how high I can go and not put any number in my head I have to reach.”