KINGSFORD — It was a historical day for the West Iron County girls at Saturday's Upper Peninsula Track Finals as they were crowned champions for the first time.

The Wykons topped the Division 2 standings with 144 points. Manistique brought home its first runner-up trophy with 99 and Newberry placed third at 84.

"We were down by 12 points at one point during the meet, but I knew we could make up the points," said West Iron coach Kristi Berutti. "The girls were so awesome. They literally did better than they were ranked. This (U.P. title) was our goal from the beginning. We had only two seniors, but they were great leaders. We'll be strong again next year."

"I usually get tired on the home stretch and hit the last two hurdles," said Pellizzer, who appeared smooth going over the final two hurdles this time. "I was so nervous before and kind of transferred that energy to the race. The U.P. title was icing on the cake." 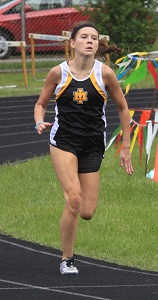 "We're very happy with being runners-up," said Manistique coach Chris Marana. "This is a big accomplishment for us. Hopefully, this will jumpstart us next year. We're losing some good seniors who will be hard to replace. But we have some good kids coming back. We knew we had to be at our A-plus game to beat West Iron. Our girls definitely competed hard, but West Iron was on top of its game today.”

"I'm pretty happy with that," Beaulieu said. "I wanted to try to keep a steady pace. But with this being the U.P. Finals, I found that I went out a little harder. Although, this wasn't anything unexpected. I felt good in the 3,200 relay and 1,600 and was able to get into a rhythm.”