Bridgeport girls track coach Rick Popp said he believes his star sprinter Payten Williams has the potential to be a world champion.

The high praise is something Williams appreciates, as she said it shows her coach has faith in her. But does the senior have that same faith in herself?

Williams was as quick to answer that as she is on the track: “Yes.”

“Payten is crazy fast,” Popp said. “She’s been the fastest girl in the state of Michigan the past two years. When you watch her run, her leg speed is insane. We don’t have a boy that can beat her in the 40 meters. The girl is just crazy lightspeed right now.”

While a world championship is a lofty goal, it’s hard to argue with Popp’s current assessment of Williams, the reigning MHSAA Lower Peninsula Division 2 champion in the 100 and 200 meters. During the past two years, she’s lost just two races, and both came at the MHSAA Finals her sophomore year. She placed fourth in both. She wasn’t unbeaten as a freshman, but she still finished first more than she didn’t and placed sixth at the Finals in the 200.

Her personal best in the 200 meters is 24.26 seconds, which she ran in July 2018 at the United States Track and Field Junior Olympics in North Carolina, placing 10th. That time would be an MHSAA Finals record in all but Division 1. Her personal best in the 100 is 12.06, which she ran at the 2018 MHSAA Finals, when she won by nearly half a second – second place came in at 12.55.

Williams said she’s always been fast, but it took good coaching to help her reach these heights. That’s something she said she began to receive while in middle school from her AAU coaches, and that has continued into high school with them and Popp. 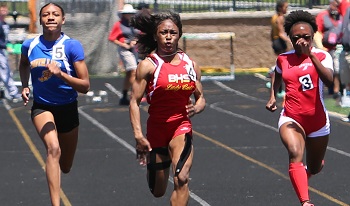 “It felt great – it felt that I was going to become something,” Williams said. “I had a lot of people looking up to me, so I knew I had to keep going further. Making it all the way to the Olympics is something that’s big for me.”

She said she’s made a decision on which college she will be attending, but that she isn’t ready to make an announcement.

Her focus for now is on finishing her high school career strong. That includes breaking the 24-second and 12-second barriers in her respective races, although she was quick to note that the 100 isn’t really her race despite the fact she’s been dominant in it for two years.

She said that even after winning the 100 at last year’s Finals, she was more concerned with the 200 she still had to run. That doesn’t mean she wasn’t happy about the double.

The times are more important to Williams than winning races. With such lofty goals and recent championship results, focusing on racing the clock could be her best path to reaching them.

“I just focus on getting to the finish line and how I run,” she said. “I don’t think about anything else. I just think about myself and the track.”

Williams has yet to run an outdoor race this season, but she did win a pair of indoor races at Saginaw Valley State in late March, claiming the 60 meters in 7.74 seconds and the 200 in 25.41.

She said she’s been off to a slower start this season, as she’s had to devote more time to her family, specifically helping care for her grandfather. While she didn’t want to elaborate, she did say that she’s getting back to practicing full time and expects to have another strong season.

There’s plenty for her to work for, including repeat championships, state records, getting closer to her Olympic dreams, and her family.

“I’m pushing myself by using my strength as my motivation,” she said. “And I’m doing it for my granddad.”

PHOTOS: (Top) Bridgeport's Payten Williams, far right, surges through the finish in winning the 200 meters at last year's Lower Peninsula Division 2 Finals. (Middle) Williams, middle, leads the 100 as contenders power through the final paces of that sprint. (Click to see more from RunMichigan.com.)