By Dan D’Addona
Special for Second Half

ZEELAND — It was a battle of familiar opponents in a familiar place with the Lower Peninsula Division 2 girls track & field title on the line.

Led by strong field events and hurdles, the Chix held off the runner-up Maroons by just two points, 64-62.

“Coming into the season, we knew it was a possibility with how close it was. We didn’t think we were losing that many points, and we had Maleigh (Vanderbeek) get hurt and Lia (Maggini) get hurt and Kianna Em transferred, and we had to work for it. But our girls never took it for granted,” Zeeland East coach Josh Vork said. “They knew they had to come out and work. Every day at practice you could see it. They wanted this to be special.”

It was a strong day for Zeeland East’s Suenomi Norinh. The senior won three events and finished second in a fourth.

“This means the world to us. We have been working so hard for this,” Norinh said. “I am so proud of my teammates. I was going to be really upset if we lost, and I am really, really happy that we won — going out with a bang.” 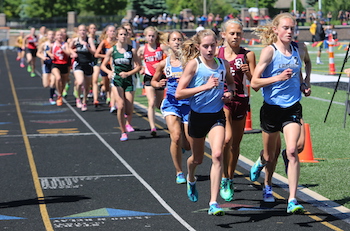 With just five athletes scoring, Holland Christian kept it close until the end of the meet, winning the final relay to close within two points of the Chix.

“It was all about the team,” Windemuller said. “We knew we had a chance at winning, but finishing second and getting a trophy is incredible. I am really happy I could run four events at a high level. I gave everything I had so I could score points for the team.”