As it turned out, that was the way. Ruffing had won the Division 1 all-around title.

“I was in disbelief the whole time,” she said of her standing atop the medal stand. “I couldn’t believe this was happening.

Ruffing didn’t win an event, but finished among the top five in each of the four events to total a score of 37.525, a half-point ahead of Grand Ledge’s Alaina Yaney, who was second.

Yaney won the vault but slipped to second with a tie for eighth in the floor exercise.

Lacey Scheid of Rockford, last year’s runner-up, won the floor exercise and the balance beam, but finished well out of the top 10 in the parallel bars, which sent her to third all-around.

It was the beam where Ruffing was able to come back from a disappointing performance in Friday’s team meet when she fell attempting a wolf three-quarter turn. 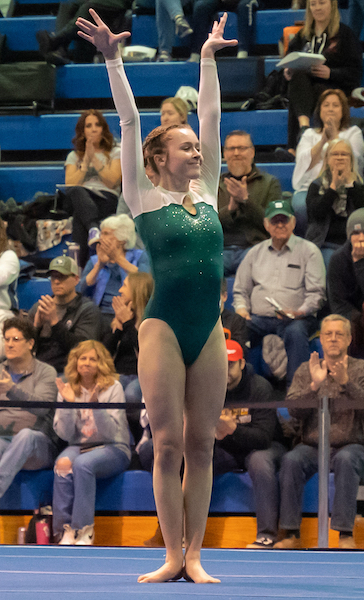 “The pressure got to her,” Livonia Red coach Mandy Brown said. “It was her last event (Friday) and it came down to her routine. (Saturday), I switched it up and had her starting toward the beginning of the beam lineup so she didn’t feel as much pressure.”

“Yeah,” Ruffing said, chuckling at the use of “amnesia.” “I just wanted to focus on one event at a time. If I mess up one event, then just forget about it and go on with my next event.”

Consistency won the day, even if it came as a surprise to the winner.

“My goal, coming in, was top three,” Ruffing said. “I didn’t know (winning) was going to happen. I was totally caught off guard.”

Instead, she moved from third last year to a title that was a most pleasant surprise.

Yaney, who went in expecting to contend for the title, also finished fourth on bars and third on beam on the way to her runner-up all-around score.

All three top finishers are juniors, which could make the 2023 Finals very interesting, indeed.

Ruffing’s teammate, Avery Boyk, was the other individual event winner, taking first in the parallel bars.

In Division 2, Rockford’s Anna Tracey won the all-around with a 36.325 score while taking first on beam and second on bars.