ESCANABA – The Escanaba gymnasts will enter uncharted territory March 7 when they make their first Regional appearance as a team at Grand Rapids Kenowa Hills.

The Eskymos qualified Jan. 10 by winning a triangular meet at Marquette with 120.7 points, meeting the MHSAA requirement of scoring more than 120 for the fourth time this season.

"It's awesome," said head coach Theresa Pascoe. "The coaches and girls are very excited because we're part of the program's history.

"I feel accomplished because we were so close last year," said Derouin. "It was a relief to find out we qualified. I needed to get an 8.5 on (uneven) bars to get the qualifying score and I got 8.6. The hardest part was waiting for the results. I was praying we'd get it and get that out of our way. It was a big sigh of relief to know we qualified.

“This is a big difference from last year. We're so much stronger this year because we know what to expect."

Davenport also was thrilled to learn the team had qualified.

"It was really surprising and exciting," she said. "We've never done this before at Esky. Everybody was so positive in practice after we got our fourth qualifying score. We were glad to get it done because then we could just work on higher routines. If we mess up, there's more margin for error.

“It feels like it will be more fun because there will so much support from our whole team. The competition downstate is definitely a lot harder, but with more difficulty in our routines we've been able to gain on them a little." 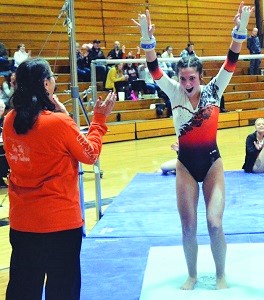 Senior Jasmine Clark will compete on balance beam, with classmate Sophie Slight on vault. Joining them are sophomores Haley Garcia (floor exercise) and Lexi Peippo (bars). Freshman Marissa Onate, who also swims for Gladstone through a co-op venture, will travel with the team as a manager.

"It's exciting being part of something that's good for the school and our coach," said Clark. "I went to the Regionals as an individual (entrant) last year. It will be nice to have all my teammates there this time."

The Eskymos received their first qualifying score Dec. 11 in a 123.65-95.6 victory at home over Negaunee.

"Our first two meets got us set up," said Pascoe. "We scored 113 at Tecumseh and 116 the next day (near Ann Arbor). I think that made us realize that it was possible to make it to Regionals. We had 14 falls on beam in our first meet. We had never been to Tecumseh and performed in very cramped quarters. All the schools have pretty much the same equipment, but everything is different at each school.

After winning at Marquette, the Eskymos competed at Valders and Antigo, Wis., where they scored 114.475 and 117.2 points, respectively.

Davenport believes the team did well in Wisconsin despite the lower scores.

"The scores were discouraging at times, but they gave us some good critiques which helped us downstate," said Davenport, who qualified for the Regional as an individual entrant a year ago. "I want to make it to the states again and get a higher team score.

“We've got to have some goals. We're just really excited to be going and so proud of what we've accomplished."

Pascoe said that while teams can enter as many as five gymnasts in each event, she decided to give everybody a chance to compete.

PHOTOS: (Top) Escanaba’s Maddie Block vaults during this season’s Elks Invitational in December. (Middle) Teammate Abbie Derouin sticks her landing from the uneven bars during a meet against Marquette. (Photos courtesy of the Escanaba Daily Press.)