They left with a shocking victory.

Jackson won the program’s first Finals by the slimmest of margins over runner-up Rockford/Sparta.

“It’s unbelievable,” an emotional Jackson coach Marcy Miller said. “We just had no idea, and we didn’t want to know the scores. We just came in here trying to do our best, and we told the girls we didn’t want to be in last place. That was it.”

Jackson had never finished in the top 10 at the Finals. Its best previous finish was 12th – which made the win that much more surprising, as well as satisfying.

“We had no expectations coming in,” Miller said. “It’s been a hard year and a hard week, and they only got to practice two days. We just wanted to come here and have fun and I’m so proud of them. I could not ask for a better group of girls.”

“We didn’t look at any other scores, and we were in the dark as far as where we were versus where the other teams were,” Fries said. “I think in the end that turned out well when we were competing. When they were announcing the scores, I was just hoping that we had done it.”

Balance beam was the event that propelled Jackson to the top.

It scored a team total of 36.825 on that apparatus, which was the highest of the 14 teams competing.

“They stayed on the beam, they stuck beam and they were confident on the beam,” Miller said. “And they just took that confidence into everything they did today. Our seniors were great leaders, and not only are they fantastic gymnasts, but they are good humans and that’s more important than anything else.” 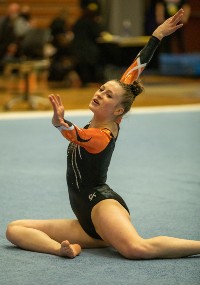 Jackson had placed runner-up at Regionals to Rockford/Sparta, trailing by five hundredths of a point.

“This feels awesome, and we had no idea coming in what to expect because we had never placed anywhere near the top,” Hamlin said. “This is the first time for us, and we were all just shocked. After each meet, we just wanted to do better and better and we came here and put it all out there and it paid off.”

Added Grim: “I just wanted the team to come in here and have fun and leave it all on the equipment. Last year we didn’t get a state finals, so the fact that we got one this year is really amazing.”

Schiffer said it was a memorable meet.

“It’s pretty cool to win the first one, and we accomplished everything we could’ve dreamed of,” she said.

Rockford/Sparta was seeking its first Finals’ win since 2017. The team won three consecutive titles from 2015-17 and placed runner-up in 2019 to Farmington.

“We are so thrilled with our second-place finish,” Rockford/Sparta coach Michelle Ankney said. “We came out and bettered ourselves from Regionals on two of our events and just did what we could. I’m very proud of where we ended up.”

Rockford/Sparta graduated six seniors from a year ago, when the Finals was canceled due to the pandemic.

“All of these girls were brand new to state competition, so they did great,” Ankney said. “We will graduate only one senior, so we will be back next year.”

Ankney, whose team was led by Lacey Scheid, said the opportunity to compete this season was a blessing.

“We kept our fingers crossed for a season,” she said. “I was a little nervous all week that something was going to happen, so to get to the end was a huge relief. We competed today, and they had so much fun.”