DETROIT – An hour before kickoff of the first game of 11-Player Football Finals weekend – the Division 8 championship decider between Hudson and Beal City – Bally Sports Detroit announcers Evan Stockton and Rob Rubick were busy preparing to call the action from the television booth on the third level of Ford Field.

Four levels above them, in the press box, a group of prospective broadcasters were touring the facilities. The high school students had spent the Fall sports season streaming games to the NFHS Network and now were learning about a career in broadcasting from Eric Vandefifer, a Montrose High grad currently serving as the radio voice of Saginaw Valley State University basketball and as a contributor to a variety of high school broadcast channels including the MHSAA Network.

Seven years ago, Vandefifer was in a similar situation. He was part of a field trip to Ford Field for the Finals that helped him realize sports broadcasting was a career he wanted to pursue. Those field trips were headed by Tom Skinner and Thom Lengyel, who became mentors to Vandefifer. As a high school junior in 2017, Vandefifer was named Best Student Broadcaster nationally by the NFHS Network. 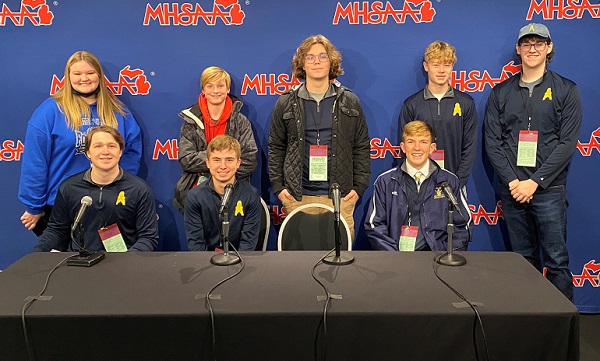 “With Tom Skinner now deceased and Thom Lengyel retired from the broadcast business, I just felt like I had to continue this and their legacy,” Vandefifer said. “It was important to me to keep it going because when I was in school, it was something I looked forward to.”

Nearly 50 students from Lowell, Montrose, Lake Orion, Mount Pleasant and Ann Arbor Greenhills high schools made the Nov. 26-27 trip to Ford Field. They were able to film highlights, interview players, practice announcing the games, meet other members of the press and more. For Vandefifer, giving back to students who are in the position he once was is very rewarding.

“We had the ability to feel like real media members for a day. I wanted to be able to give other students that same opportunity,” Vandefifer said. “Seeing kids who have a love for sportscasting and that drive to get better gives me real hope for the next generation in this business.”

And after the field trips were done each day, Vandefifer put his headphones on, got behind the microphone and called the two afternoon games for the MHSAA Championship Network.