PLYMOUTH -- Six years is a long time, by any standard.

The drought ended Saturday, when the Cranes ended Calumet's bid for an unbeaten season with a 4-1 victory in the Division 3 Final at USA Hockey Arena.

"We did this for ourselves and for the seniors in past years who couldn't get here," senior Alex Ceritano said. "This was for them."

"This was a group of outstanding leaders," LaFontaine said. "I'll be honest. I had to do nothing. These guys took care of everything."

The Cranes took care of Calumet, too, allowing the Copper Kings only 10 shots for the game, including just one in the third period.

'They boxed them out, a lot of times," Cranbrook goalie Julian Zyvagin said. "They blocked a lot of shots before they got to me, and they made them dump the puck." 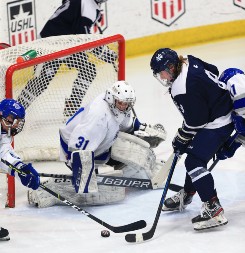 Meanwhile, the Cranbrook offense got going in the second half of the first period.

Nathan Hooker got things started with a power-play goal with 4:44 left in the period. Wineman scored on a breakaway with exactly two minutes left in the period to give Cranbrook a 2-0 lead over the stunned Copper Kings (17-1-1), who rarely trailed in a game this season.

"We were only behind in one game this year, for about 10 minutes," Copper Kings coach Dan Giachino said. "But we kept working. That's all you can do."

Cheli essentially put the game out of reach with a goal early in the second period. Tom Erkkila scored for the Copper Kings, but Ty Esterlione tacked on an insurance goal midway through the third period to seal the victory.

It was Cranbrook's ninth Division 3 crown.

It was Calumet's first trip to the Finals since 2018. The Copper Kings were among teams affected when last year's tournament was cancelled, turning back after having completed most of the 12-hour journey from Copper Country.

That they made the trip this year was a tribute to the work ethic by a team that lost 11 seniors last season.

"We have two-thirds of a new team this year," Giachino said. "Getting here was a tribute to our 10 seniors."

The chemistry which lifted Calumet back to the Finals also was evident on a Cranbrook team that lost in the Regional Finals last season.

"Our JV players from last year came in and impressed everyone," Ceritano said, "We came together so well. There were no problems at all this season."

Wineman, along with his teammates, savored the accomplishment afterward.

"It's been my dream since my freshman year," he said. "I came here (weighing) 90 pounds and I was 5-foot (tall). I've had great company, great teammates these last four years.

"We've been building toward this the last four years. I'm so happy my dream came true."