With all but three players returning from a team that had made the program’s first MHSAA championship game, the Hawks knew if they put in the time, another special season could be in front of them.

But the schedule makers gave them something to look forward to anyway – a season-opening rematch with Brighton, the team that had defeated them in the Division 1 title game eight months prior.

“There was for sure a little revenge in the back of our minds coming into that game,” Heritage junior forward Brady Rappuhn said. “I think the Finals last year was a stepping stone for us. Even though we didn’t win, just the experience was good for us.”

Heritage won the rematch 7-1 on Nov. 17 and hasn’t looked back, starting the season 11-0 and winning every game by four goals or more. It’s a stunning beginning that includes wins against six ranked teams, including two (Brighton and Salem) top-five teams in Division 1. That dominance has elevated Heritage to No. 2 in Michigan Hockey Hub’s Division 1 rankings, and No. 3 in its Super 10 pooling the best from all three divisions.

And nobody on the team seems surprised by it.

“We only lost three players from last year’s team, and we had a couple guys come in that were real good hockey players,” Heritage coach JJ Bamberger said. “Just the returning core of players we had, we were expecting to have a pretty good run. We talked about at the beginning of the year – last year, we fell short by one game, but we didn’t want to talk about getting back to that point. We just want to work on getting better every time we’re on the ice.”

Several factors have led to Heritage’s amazing start, but the one that could benefit the Hawks most later in the season is their incredible depth. Seven players are averaging at least a point per game, led by Rappuhn who has 14 goals and 15 assists thus far. Two other players – Parker Severson and Edison Symons – have scored 10 goals. Sixteen players have scored at least one goal, and 19 have registered at least one point.

That depth extends to the crease, where starting goalie Jack Jesko has a 1.32 goals-against average and .931 save percentage over eight games. Backup Jacob Winters has played three games and allowed just one goal on 42 shots.

The most remarkable statistics, however, are in the period breakdowns. The Hawks are outscoring opponents 19-5 in the first period, 25-5 in the second and 31-1 in the third.

“That first period a team will hang with us, but we just keep going,” said Bamberger, who noted that each player on his team having a GPA of 3.0 or higher is actually the most remarkable statistic. “I’ve been coaching for 17 years, and it’s the deepest team we’ve had. Sometimes I’ve had top guys who were better, but I’ve never been able to have that many guys coming at you nonstop. If a team plays two lines against us, it’s going to be very difficult to keep up with our speed. There’s no weakness.” 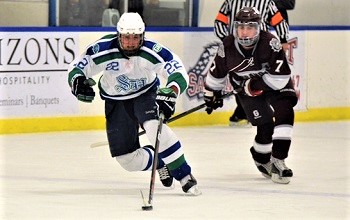 The Hawks’ depth also creates a mental edge for the players.

“We can roll anybody out there, and I think any of our lines can play against anybody,” Rappuhn said. “We have confidence in everybody on our team. We have a trust in our teammates and what our coaches tell us, and that allows us to be a better team.”

It also keeps them sharp.

“If you have a bad game, you know another guy is coming for your spot,” senior defenseman and captain Joe Watson said. “It pushes us forward and gives us a little bit of competitiveness to keep our spots.”

Heritage’s rise didn’t happen overnight. The building blocks were laid nearly a decade ago through the Saginaw Jr. Spirit program, which gives youth players in the area a chance to play together against top-level competition.

“The goal was to have the best players from Saginaw, Midland and Bay City come together,” said Bamberger, who is the director of the Jr. Spirit, and added teams such as Midland Dow and Davison are also seeing the benefits of the program. “It’s one program that was kind of set up for the whole Tri-City Area.”

Much of Heritage’s nucleus played for the Jr. Spirit, many of the current Hawks winning one – or in some cases, two – state titles.

“They won back-to-back state championships, so they knew how to win,” said Watson, one of a handful of Heritage players who did not play for the Jr. Spirit. “That just kind of helped us out.”

With all this positive momentum, there could be a temptation to look ahead to another MHSAA Finals appearance. But the Hawks claim they instead are sticking to Bamberger’s advice of focusing on day-to-day improvement.

“I think our coaches have really put it in our minds that we can’t look ahead, because any team can beat us any night,” Rappuhn said. “We’re a really good team, but there are also a lot of good teams that we’re playing, so if we don’t come ready to play, any team can beat us. We try to worry about that game, and that period, and that shift. We don’t try to look ahead.”

Even when asked to reflect on what they’ve accomplished, and how it would feel to win the school’s first MHSAA title in hockey, the players stayed fairly grounded.

“It’s just been a really good experience to go through,” Watson said. “I strongly believe everyone on the team is not going to take it for granted if we do get back there. It would be pretty good to get there again, and hopefully win it.”

PHOTOS: (Top) Saginaw Heritage players, including junior Connor Krauseneck (12), celebrate one of their many highlights this season. (Middle) Hawks senior Dane Senkowski (22) pushes the puck up ice as a Grandville player trails him. (Photos by Amy Best.)