KALAMAZOO — When Mitch Kihm was a freshman, his Kalamazoo United hockey team posted a 1-9 record in league play.

The goaltender said he was confident things would get better – and his patience has paid off.

“In my dreams freshman year, I was thinking of my senior year but never expected us to be this good,” Kihm said.

United is currently 5-1-0 in the Southwest Michigan High School Hockey League, losing for the first time last week, 4-3, to the Kalamazoo Eagles. United is 14-1-1 overall.

“This is cool this year,” league commissioner Frank Noonan said. “In the 18 years I’ve been doing this. they’ve never been a powerhouse team.

“I think a lot of it is their coaching. They’ve got a young guy (Tyler Kindle) in there who’s a former professional player and now he’s taking that energy as a player and turning it into coaching.”

Kihm added that experience is also a key.

“I knew from my freshman year that we might not have been that good but we all bonded, and now our entire team has really come together and has nice chemistry,” the Hackett Catholic Prep senior said.

“Everything’s a lot different in the locker room, attitude-wise, now from our first two years.”

“My sophomore year, the attitudes weren’t that good,” he added. “We were expecting to lose. That’s slowly going away. This year it’s all positive.”

United is a co-op team with players from K-Central, Loy Norrix and Hackett. Norrix’s Andrew Laboe is the team’s athletic director.

Next month, the team will host an MHSAA Division 1 Pre-Regional at Wings West which includes East Kentwood, the team that knocked United out of the postseason last year. Lowell is the other opponent.

Not having all his teammates as classmates has its good side, Taplin said.

“It can be for the better because if you’re having problems with someone at school, that can transfer over,” he said. “Here, it’s just hockey.” 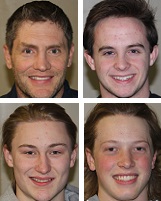 Although he and senior Noel Cavey are the only two from Norrix, Remelius attended K-Central the previous three years.

In addition, “Most of the Hackett guys, the seniors, I’ve been playing with them since I was 10. So we’ve grown up together, and we’ve gotten a lot closer over the years.”

The seniors have stepped into leadership roles and are the team’s top point-getters.
Cavey leads United with 44 points on 21 goals and 23 assists.

“He does everything for us,” Kindle said. “He plays nearly half the game. He contributes offensively for us and is really stout defensively.

“He’s one of our biggest hitters. He takes the body well and is strong on his feet. He makes smart plays.”

Cavey and Kihm are the only four-year players on the team.

“Noel Cavey’s been through it all,” Kindle said. “He’s seen all the ups and downs and it’s fun to see him have a good season. He’s leading the team in goals right now.

“James Amat has been playing really well, especially lately, and Q’s (Cerutti) a really big kid and he’s a force out on the ice. He can shoot the puck. When he’s playing well, we’re tough to stop.”

Kindle said he has confidence in his netminders.

“Both Mitch and Jake Gerhard (Kalamazoo Central sophomore) have done a real good job back there when they’ve been in.

“They’ve really stepped up and are stalwarts back there.”

Kihm has eight wins and Gerhard has five. K-Central senior Jenna Stanley, playing her first year of high school hockey, was in goal for one win.

Taplin is a two-play player.

“He’s having a really good year,” Kindle said. “He’s a forward but he also drops back on D.

“He’s been kind of our utility guy. He plays wherever we need him.”

Cerutti’s first year with the team was the 0-10 season.

“Just the fact that we knew we had a great, great core and all of our ‘stars’ were sophomores at the time while all these other schools had juniors and seniors leading them,” he said. 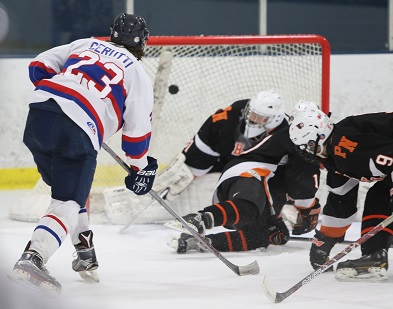 “We were thinking just another year, another two years and we’re gonna be that team that everyone looks up to. This year we came in with sky-high confidence, and we just keep going.”

Kihm said being the team’s last line of defense is not easy.

“The mental part before the games is tough,” he said. “It does seem like a lot is riding on you. It feels like if you let a goal in, it’s all your fault.

“But you can’t think that way or it’s gonna make the whole game, for you at least, pretty bad.

“The fun part is definitely making the big save that helps the team, gets them motivated and then go score a goal. Winning games is the most fun part.”

Remelius said the worst part of the six-team SWMHSHL is “Our team is actually the only team in the league without a rivalry, without a Cup. All the other teams have one and then there’s us.

“There’s Mattawan and Portage Central, Central and Portage Northern. Eagles and Blades have a rivalry cup so we’re left out. The only trophy we’re playing for is the league championship trophy.”

Kindle took over as coach three years ago and his first year was the winless one. From there, he started building a winner.

“We have a saying, “Nine years in the pros,” Taplin said of the coach. “He actually does bring experience.”

One of Kindle’s pro seasons included a stint with the minor league Kalamazoo Wings.

He took over United when he retired.

“I got old and started to slow down a bit,” said the 38-year-old who is a civil engineer at Kingscott Associates. “The minors aren’t always glamorous.

“It was a lot of fun, but it got to a point where it’s time to let the younger kids play. I would never trade anything. I have no regrets.”

When he took over the team the biggest problem was motivation, Kindle said.

“When I first got here, there was a lot of just standing around on the ice,” he said. “I would see the puck and I would be like ‘Go get it, just go get the puck. That’s all you have to do. It’s easier to score if you have the puck.’”