But Bloomfield Hills Brother Rice's Alec Hamady made good on his Saturday, jamming a rebound into the net for the game-winning goal with 6.7 seconds remaining to lift the Warriors to an eventual 2-1 victory at USA Hockey Arena.

The championship was the fourth in Division 2 and fifth overall for the Warriors (15-4).

For Byron Center (17-1), it was a sudden, heart-stopping end to a memorable season.

"There's no way to describe it," Hamady said of winning Saturday after his team's 2020 championship bid was thwarted when the season ended before the Semifinals due to the coronavirus.

The winning goal came as the Warriors were swarming in front of the Byron Center goal.

"I hit (the goalie’s) blocker, and the puck slid back to me," Hamady said. "I hit it backhanded, and it slid under his blocker."

The Bulldogs then pulled goalie Carson McKenzie for an extra attacker during the final seconds, but Brother Rice shot the puck into the Byron Center end with three seconds left and began celebrating. 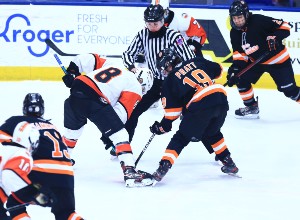 The spell was broken when Brother Rice's Carson Moilanen scored on a rebound with 10:56 left in the third.

But the Bulldogs responded immediately when Logan Nickolaus skated in on Danoo, then passed to Mason Breit, who tied the game just 10 seconds after Moilanen's goal.

"We could have collapsed," he said. "We told the kids it was the same game as before and to keep playing. They did a good job of that."

Byron Center was playing in its first Final after it reached the 2020 Division 1 Semifinals before the season ended early.

"We have 10 seniors who built this program from nothing," Byron Center coach Taylor Keyworth said. "I couldn't be more proud of our team. No one's had it tougher than the teams that got cut short last year at the end of the season. We go into this season thinking we had a good team, only to get cut short in November. We finally get a chance to play and our guys stayed positive and stuck with it, banded together and had a fantastic season."

After the game, several Brother Rice players, including Hamady, skated to their Byron Center counterparts.

"I used to play with those kids on the TPH Top 80 team," Hamady said. "I became really close with them. I told them they played an outstanding game, they are amazing players and not to worry. It was a battle."