PARCHMENT — After being pelted by pucks when he was very young, Breckyn Bootland knew for sure he never wanted to become a hockey goalie.

Instead, the Parchment junior focused on puck handling and is making his mark as a forward for the Kalamazoo Eagles cooperative team in the Southwest Michigan High School Hockey League.

If the name Bootland sounds familiar, it is because his dad, Nick Bootland, has been head coach of the ECHL Kalamazoo Wings for the last 13 years.

One could say hockey is in Bootland’s genes. Besides his father, his uncle Darryl Bootland also played professional hockey.

The “puck pelting” happened during youth hockey, where the players had a chance to experience all positions.

His dad also unleashed a few shots at his son, who was wearing goalie pads, in the backyard to give him a taste of the position he was hoping he would not like.

The young Bootland said goalie was never an option. Besides not liking people to shoot pucks at him, “I always liked scoring.”

That practice has paid off.

He was named team Rookie of the Year last year, recording six goals and three assists in 12 regular-season games during the COVID-shortened season.

After playing youth and then travel hockey, Bootland opted for high school hockey – but the transition was not as easy as he expected.

In travel, “I was just playing against guys my age, so when I stepped on the ice and saw guys that were way bigger than me, it was definitely a shock,” he said.

‘I knew guys would be bigger, but just to be out there with those guys was different. Knowing some of the guys out there helps out from a maturity standpoint because you have guys keeping you in line.”

He also had his dad available to do the same.

With the K-Wings organization opting to sit out the 2020-21 ECHL season because of COVID protocol, Eagles head coach Matt Kruzich asked Nick Bootland if he would be comfortable stepping in as his assistant coach

“When he speaks, they listen.”

After making sure his son was okay with the arrangement, Bootland agreed, giving father and son a chance to bond as they never had before.

Because of the K-Wings’ schedule, Bootland said he saw maybe one or two tournaments his son played throughout his travel hockey years.

“I literally watched more hockey and was around him and was on the ice with him (last year), than ever before,” Nick Bootland said.

“We practiced for three or four weeks before (the Eagles) were allowed to play any games, and then we practiced and played games. We’d travel in the car together. To do all those things was fantastic.”

Before that, “It always was me and my mom (Christine) going on trips to tournaments, and we’d always carpool with other people, which helped me get closer to my teammates,” Breckyn Bootland said.

This year, with the K-Wings back on the ice, the junior will start the season without his dad in the rink.

The Eagles’ first game is Nov. 24, and the K-Wings play a home game that day.

There are upsides and downsides to playing a sport his dad coaches, the junior said.

“I guess he knows what he’s talking about,” he said, laughing. “When I have a bad game, he doesn’t yell at me about it; he tells me ways to get better.

“It’s always been helpful to me to have his knowledge to bounce off of.”

“He’s always right so I can’t really ignore him, even though sometimes I want to, like after a bad game I’ll just say, ‘I don’t want to talk about it.’

“But I know he has the answer.”

Breckyn Bootland went to his first hockey game when he was just months old when his dad played for the K-Wings.

By the time he was 3, he was skating on the ice. 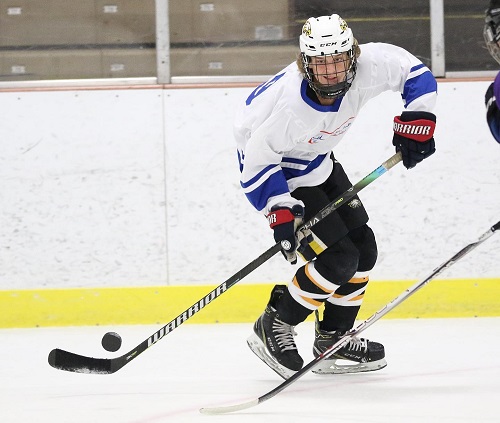 As he got older, some of the K-Wings would take him under their wings after practices.

“I remember going to games and going into the locker room, only after a win though,” he quickly added.

Nick Bootland said the family never pushed their son toward hockey, but he seemed to take to it from the start.

His bedroom had a hockey theme and his carpet was an ice rink.

Looking at his son from a dad’s perspective, “I have a pretty smart, high-hockey IQ son,” Nick said.

“One time he had a coach where he didn’t think what he was saying was right. He asked me how to handle that.”

“I said you respect it and do it the way your coach said to do it. That was the best advice, I think, that I could give him.”

As a coach, Bootland is impressed by his son’s puck handling.

“He’s got super slick hands,” he said. “He can do things with the puck that I can’t and could never do.

“Within that 10 feet of the net, his skill set, his passing and his dangle, his ESPN moments, all those things that make hockey crazy and unique, he’s got a real knack for that.”

Bootland said he tries to give his son two positives and one negative after a game: “I don’t want to be the dad to take the fun away.”

After losing several seniors to graduation, Kruzich said the junior will be one of the seasoned players he will count on this season.

“He has a relentless drive and works his butt off in every situation,” Kruzich said. “He’s a true competitor, just like his dad.

“He has that high energy and good spirit. He’s got really good feet and really good hands and competes at a very high level every shift.”

Breckyn Bootland is one of 20 players on the Eagles, and one of three juniors. The team has eight seniors, along with four sophomores and five freshmen. Richland Gull Lake supplies seven athletes to the team, with five from Vicksburg, four from Plainwell, Bootland from Parchment and one more apiece from Comstock, Kalamazoo Christian and Paw Paw.