Growing up in Yale, Trevor Sugars never thought about playing high school hockey. He bounced around Sanilac, St. Clair and Lapeer counties finding house leagues to stay involved in the sport he loved, as Yale didn’t have a team.

But a year ago, thanks to an expansion of the Port Huron Unified cooperative team, a new option arose, and Sugars has taken full advantage.

“This is great for Yale because we get to come out and have a hockey team, and younger kids can get into the sport of hockey,” said Sugars, a junior defenseman. “They’re able to go further without having to pay all the money for AAA.”

“I went to a coaching clinic before the season started, and we actually had a roundtable about unified hockey programs,” Port Huron coach Ben Pionk said. “It was kind of interesting, because we all had one common theme. Most of us were all there for survival. That’s why we’re unified. A lot of the teams were in the same boat. Some of the other unified programs, they have like seven schools and you’re getting two kids from each school just to make a team. Honestly, it was all for survival, and that was solely ours. It wasn’t to build a superpower team; it was to make sure we had a team we could even put on the ice.”

Pionk has been at Port Huron for two decades, most of which spent coaching a team solely from his school. But numbers began to dwindle not long ago, threatening the future of the program.

“I can’t remember what year it was, but we had tryouts and I had eight kids standing here,” Pionk said. “I went to our former athletic director and talked to him and said, ‘What do you want us to do here? You really can’t put a program on the ice.’ We actually started the season that way and then we picked up a few more; I think we ended up with 12 that year. We got through the year, and kind of the next year was the same way. You go back four or five years and people weren’t working a lot, so what are you going to do? Are you going to play hockey or pay your bills?”

Not only was it hard to be competitive with so few players, but Pionk was worried about the safety of his players, who were forced to take longer shifts. He said he knew there were players in St. Clair – a school that had a program through the 2012-13 season – so Port Huron became a unified team for the 2016-17 season.

It didn’t happen overnight, but the team has now nearly doubled in size. 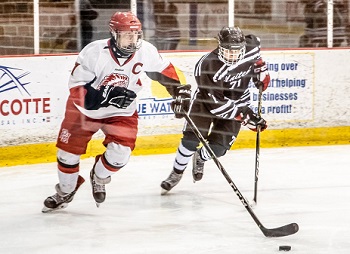 “Even after the first year or so of being unified with St. Clair, we still weren’t getting really good numbers,” Pionk said. “We just found that a lot of the older kids down there had been with their teams, and at this point they were established where they were and didn’t want to leave to come play high school hockey. They would love to have played high school hockey but didn’t want to leave at that point. Through Port Huron Minor Hockey’s help, they knew there were a couple kids in Yale who had kind of aged out and weren’t going to have anywhere to play, so we kind of approached their school about it and next thing you know, we had Yale as well. Now, a few years into it everybody knows we’re unified and the kids are coming out. We have 17 skaters and three goalies this year.”

The six players from St. Clair this season make up the biggest group Port Huron Unified has brought in from another school besides Port Huron High. While they may have grown up expecting to one day be Saints, they’re grateful for the opportunity they now have.

“The high school experience is so much fun,” said Duncan McLeod, a junior defenseman from St. Clair. “It’s just fun to play for something – something big.”

While players from out of town are excited about a newer opportunity, those within the program are excited to see their team growing again.

“My freshman year, my sophomore year, we were really struggling on numbers,” Port Huron junior Kevin Schott said. “It was tough having to double shift a lot and pretty much play wherever Coach needed you to play. This year I was really excited to hear that we had a lot of kids coming from St. Clair and Yale – some better skating kids that I knew had played travel. So, I was really super excited to see that we were going to have a full and deep team this year.”

With all the new faces and multiple schools combining to create one team, not a lot of the players had played with one another prior to high school. That hasn’t been an issue, though.

“We all came together real quick, because we all know how to play hockey – we've all been playing hockey for at least four years,” Sugars said. “We all know our positions, got together and figured it out.”

This year’s team has already enjoyed as much success as any of its unified predecessors. The Big Reds opened the season with a pair of wins, eclipsing last year’s win total (one).

“We’re trying to be at least .500 this year,” Sugars said. “I wanted to be the best Yale high school team, but we already did that.”

A flu bug hit the team right before Thanksgiving, which didn’t help during a busy week. But even sitting at 2-3, there’s optimism about the season and the future, as without a senior on the roster, there’s a possibility everyone could come back next year.

“It’s looking positive for the year,” McLeod said. “We have a good team going.”