The Shamrocks (18-1) did so by beating first-time finalist Rockford 5-1 at USA Hockey Arena.

"This was truly a program win," said coach Brandon Kaleniecki, who led DCC to a title for the third time in his six years as Shamrocks coach. "We found a way through."

He wasn't just blowing smoke. The Catholic Central varsity was sidelined last week due to the coronavirus, but the junior varsity stepped up to the challenge beating Berkley and Troy before the varsity was cleared to return for the Quarterfinal.

The Shamrocks also swallowed the bitterness of the sudden end of last season due to the virus.

"We wanted to win it for last year's seniors," co-captain Brenden Cwiek said.

"I was on the team that won in 2019, and it was the most fun team I ever played on in hockey," co-captain Nick Borchardt said. "This year is like the end of the perfect story."

The ending got off to a good start, with DCC scoring twice on special teams

Brennan Sass got the scoring started with a power-play goal at the 7:43 mark. A little over a minute and a half later, William Shields stole a puck during a Rockford power play and scored a shorthanded goal to make it 2-0. 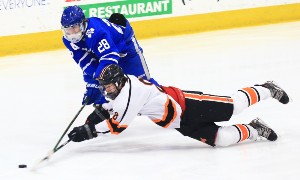 The Shamrocks scored two more in the second period, by Bret Beale and Ryan Wartuck to make it 4-0. Rockford's Carson Korte scored early in the third period to get the Rams back in range, but Kaden Hemme scored late in the third to put it away.

"I think we got a little too comfortable," Kaleniecki said of Korte's goal. "It was a good reminder of how we need to play.”

Rockford (15-6-1) became only the third school from the west side of the Lower Peninsula to reach the Division 1 Final, following Grandville (2015) and East Kentwood (2005).

"They're deep," Rockford coach C.J Pobur said. "There's not many public schools, if any, that can go four lines deep. We thought that 5-on-5 our group was ready to go, but their execution on special teams was exceptional tonight."

The Rams' run to Plymouth was fueled in part by a core of teammates who grew up playing together. Some of the players have been together nearly a decade. That cohesion, along with the addition of Korte and Owen DeVries this year from travel hockey, lifted Rockford to the best finish in school history.

Rockford and Division 2 runner-up Byron Center represented the west side of the state.

"I think it's a great area,” said Pobur, who like Kaleniecki is a Detroit Catholic Central graduate. "I think there's great hockey over there, but it's just not as big. You don't have as many big players. You might have two or three strong programs (on the west side), but they have 10 or 15 on the east side."

While they didn't get the result they hoped for, the Rams went home with heads held high.

"It wasn't a great result," DeVries said. " I think everyone in our locker room can say we gave it (our) all, and that's really all we ask for."