TRENTON – There’s something special about the sport of ice hockey in Trenton. There are those who would contend, at the high school level, that Trenton is Hockeytown.

Trenton has won 14 MHSAA titles, second only to Bloomfield Hills Cranbrook Kingswood’s 17. But the importance of hockey in this downriver community goes beyond winning on the ice. The sport transcends the ice to the lives of people who have never laced up skates.

Chad Clements has experienced this firsthand, first as a fan, then as a player and now as a coach.

Clements played for legendary coach Mike Turner, and it was Clements who replaced Turner in 2014 when Turner retired.

Replacing someone who gave so much to the sport and the Trenton community would be a no-win situation for some. It’s often been said that you don’t want to replace a legend. You want to be that coach who replaced the guy who replaced the legend.

Not Clements. He spent 12 seasons as Turner’s assistant and had no doubts he was the right person for the job.

And Clements was not alone. Turner backed Clements, and so did the administration.

Dr. Michael Doyle is in his 13th year as principal at Trenton High and he had no second thoughts about whom his school district should hire to replace Turner.

“Chad is an educator, a true educator, on the ice and in the classroom,” Doyle said. “That was critical (in the hiring process). He knows his stuff. He’s a great teacher. He’s passionate. You keep it in the family, yes, but when the job opened up, he was the perfect fit.

“(And) as a principal, it’s so helpful to have coaches in the building.”

This is Clements’ 16th season coaching at Trenton, and it’s his 16th year teaching social studies at the high school. A graduate of Michigan State University, Clements, 38, has been groomed for his place in the community. 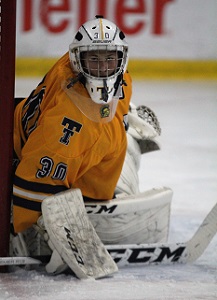 “As a player, I always had great respect for (Turner),” Clements said. “His son was a year older than me, and he played with my brother who was two years older than me. So I knew (Turner) at an early age. It was always ‘yes sir’ and ‘no sir’ when I was around him. He was a quiet guy, at that time, around me. Then my senior year he opened up to me, as a person. He asked me what I was I going to do. What plans did I have for college and after? So when I came back (to teach and coach), I remembered that.

“For me, as a coach, (our relationship) was completely different. Behind closed doors he’d talk and talk and talk about hockey and his family, and I never expected that.

“We’ve been close ever since.”

Turner holds the state record for career hockey coaching victories at 629. He began coaching in 1974, took some time away from the game following the 1981 season and returned to coaching in 1995, Clements’ first season on varsity. Of the program’s 14 MHSAA titles, Turner was on the bench for 11.

Clements said he and Turner talk at least once a week, about hockey and life in general. Turner travels extensively now, to Europe and throughout the U.S., and much of their conversations include capsules of the many sites Turner has seen. But when he’s back in the area, Turner is often seen at Trenton hockey games.

In many ways Clements is the right person at the right time for the program. He knows the expectations are high, yet at the same time he doesn’t place added pressure on himself to win. He was taught that if you do your best, by putting in the time and the work, then you can go home at night, look at yourself in the mirror and be satisfied with the results.

The results have been quite positive so far this season. The Trojans are 5-2 with losses to Detroit Catholic Central and Bloomfield Hills Cranbrook Kingswood, two of the top teams in Division 1. Trenton, which will compete in Division 2, has defeated reigning Division 2 champion Birmingham Brother Rice (4-1).

“I’m surprisingly happy with our start,” Clements said. “I knew we would be young. I didn’t know what the expectations would be. I wouldn’t expect to be 5-2 after seven games, I’ll tell you that. The kids just keep working and working and working. We lost a tough one against Cranbrook in overtime, but the kids bounced back.”

Trenton has received a big boost from sophomore goaltender Joey Cormier. The Trojans would be lost without him – if for no other reason than Cormier is the lone goaltender of the roster. Another goalie will back up Cormier, but he won’t be eligible until the second semester.

Last season was a disappointment for Clements and his team. The Trojans were defeated in a Pre-Regional by Livonia Churchill, 4-3 in overtime, and senior center Drew Welsch said some of the problems were internal. His team also is welcoming back the support from classmates.

“We lost our fan base,” he said. “We’re getting more support this season. We got our band back. … I’m good friends with the guys who get the student section going at games, and me and the other seniors are trying to get more to come out. So far it’s been fun. There’s nothing better than playing before a big crowd.” 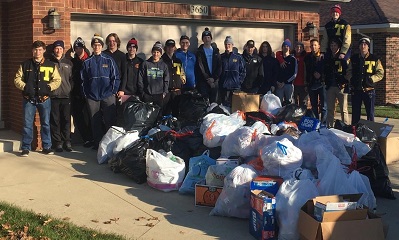 The Trenton community’s passion for its hockey program certainly is a difference-maker. Some of the state’s top hockey players choose to play travel hockey rather than for their schools. On the travel circuit, players get more games, and against stronger competition.

“This is my favorite team I’ve been a part of,” he said. “It’s the tradition. There’s not a team I’d rather play for.”

It’s a two-way street. The players receive the acclaim from the student body and the community, and they give back, too.

For the past month the players have been collecting cans to raise money to give to a needy family in Trenton for Christmas. The holiday came early this past Sunday for a single parent and her two children when the players presented her with $1,000 worth of gifts including clothes, food, a Lego set, a tablet, and gift cards.

“The support we get is awesome,” Welsch said. “I like doing it. They support us. We have to help them out in any way we can.”

That’s the way it is in Trenton. You grow up there, you go to school there and many, like Clements, return home to work there.

“Community, that’s what we try to sell,” he said. “Whether it’s your classmates in the crowd and when you get a teacher or a staff member there, it means a lot to these guys. To see your teacher in the stands, taking two or three hours out of their lives to watch you play, it means so much. Heck, we’ve had the mayor come out and firemen and police officers. I’ve been able to establish relationships. It’s nice to have that.”

PHOTOS: (Top) Trenton’s Drew Welsch (12) moves the puck up ice with a teammate trailing. (Middle) Goalie Joey Cormier has been an anchor in net for the Trojans. (Below) Trenton’s players also took time this winter to bring an early Christmas to a local family. (Photos by Christine Stawowczyk.)