PORTAGE — Although his hockey team skidded to the worst start during his 30-year coaching career, JD Kalleward and his Portage Northern Huskies still have that positive vibe going.

“We don’t want to keep losing,” senior co-captain Jack Budnick said last week after the team opened 0-7. “We want to turn it around as soon as we can.

“We’ve had a lot of close games where it’s just come down to a couple mistakes, and we’re working on them in practice.”

Portage Northern closed the 2015 portion of this season's schedule with its first win, 4-2 over Manistee on Friday, to move to 1-8 heading into the new year. And Kalleward is one reason the players are staying positive and focused, said senior co-captain Austin Killman.

“He’s been very vehement about hockey,” Killman said. “If he sees anybody slacking in practice, he’ll get them going.

“He’s been around the game for so long that he knows a lot about hockey and what systems will work in different situations. I have a lot of faith in his style.”

Kalleward said he honed his coaching style while working as an assistant to Art Missias, who passed away from cancer in 2010.

A netminder, Kalleward graduated from Northern in 1980. During his high school years, he helped coach goalies for his uncle, John Kalleward, Sr., and Missias with their squirt and peewee house teams.

It didn’t take long for JD to catch the coaching bug.

When Missias took over the head coaching job at Portage Northern 30 years ago, he tapped JD Kalleward to be his assistant. Thirteen years ago when Missias retired, Kalleward took his mentor’s place.

One of the lessons learned from Missias is helping Kalleward deal with his team’s record so far this year: “You may have a down game, but it’s just one game.

“You’ve got to move on, learn from your mistakes and take the positives from it. Try and hope in the next game you do better.”

After losing nine seniors to graduation from a team that went 18-9-0 overall, 8-2 in the Southwest Michigan High School Hockey League last season, Kalleward knew this would be a rebuilding season. But he didn’t expect such a challenging start, including 0-2 in the league.

“Six of our (first) seven games have been on the road against very good programs including Traverse City, Forest Hills, East Kentwood, so we’ve had some pretty stiff competition,” Kalleward said.

Besides Budnick and Killman, the Huskies have just two other seniors: forward Scott Verduzco and goalie Tim Fitzgerald.

Although the Huskies have struggled early on the ice, Kalleward is most proud of their academic performance.

In his 13 years as head coach, his team has earned academic all-state every season.

‘We have a number of kids who are academically gifted. Of the nine who graduated last year, we had just one beneath a 3.0; the other eight were above 3.5.” 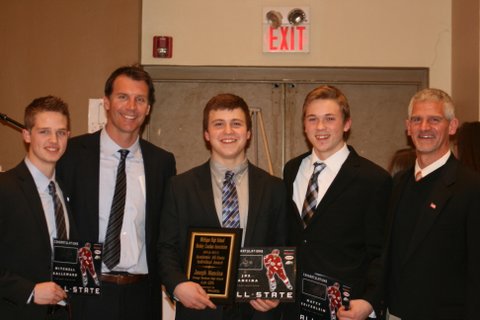 One main reason Kalleward stresses academics is, “quite frankly, there aren’t too many who are going to sign NHL contracts,” he said. “We know that life after high school means doing well.

“Every Thursday we meet with the players after practice to talk about where they are at school, their grades. We offer tutoring with those who are struggling.”

Over the last 30 years, Kalleward has seen several changes to both the game and the players.

“Relative to talent, you used to have a lot more kids going the route of playing high school,” he said. “Now they have so many options for players depending on what they want to do with their hockey careers.”

He also said players don’t seem as independent as they were in past years.

“What we find is sometimes it’s hard for kids to make their own decisions or make good decisions on their own,” he said. “As a coach, besides the X’s and O’s, we try to help them with that.”

As an assistant coach, Kalleward took note of what worked especially well and wrote a manual of expectations for coaches, parents and players that he distributes every season.

“We have an agreement signed by both parents and players saying they’ve read and understood the 16 points of emphasis, everything in the agreement: ice time, player behavior on the ice, behavior off the ice, academics, and so on,” he said.

Among team requirements are wearing khakis, a shirt and tie when going to games, “The same apparel they’d wear for a job interview,” he said.

“We eat together quite a bit and have rules on behavior. There’s probably a good three pages of rules.”

Killman said it’s up to the captains to help turn the team around.

“You have to get your guys motivated for games, and if they’re getting down on themselves, try to get them back up,” he said. “If they’re coming to practice slacking, you’ve got to push them. 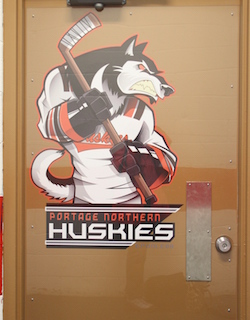 Budnick said Killman is one spark on the team.

“Out on the ice before we go to opening faceoff, we gather around the net and we talk about the key aspects that we want to work on in the game,” Budnick said. “Austin is always taking the responsibility and says exactly what we need to do.

“Austin is definitely the hardest worker on the team, and that’s a great leadership quality from my perspective. It pushes everybody else.”

Tom Askey, who played pro hockey, including with the NHL Anaheim Mighty Ducks in 1997-98 and the then-United Hockey League Kalamazoo Wings in 2006-07, works with the goalies.

In 1975, the Huskies made it to the Tier II MHSAA Final before losing to Lansing Catholic Central. They made at least the Semifinals four times under Missias.

In spite of this year’s start, the future looks promising for the Huskies with four juniors, 10 sophomores and two freshmen mixing with the senior leaders.

The freshmen are forwards Zonjic Singleton-Julian and Connor Sorge.

Northern picks back up this season’s schedule Jan. 2 against Okemos.