Dr. Kiran Taylor is in her 10th year as a practicing psychiatrist and specializes in providing therapy to cancer patients and family members who care for them.

Taylor is the medical director of the Supportive Care Medicine Clinic at Spectrum Hospital’s Lemmen-Holton Cancer Pavilion in Grand Rapids. She's also the Chief of Psychiatry and Behavioral Medicine for the entire Spectrum Health System, which includes 11 hospitals and nearly 200 ambulatory and service sites all over the western Lower Peninsula.

And Thursday, she made sure to schedule a trip to her children’s school for the Halloween parade and costume parties.

Balancing is a daily requirement for Taylor (formerly Khanuja), an MHSAA Scholar-Athlete Award winner as an East Lansing senior in 1994. But the skills she learned as a tennis standout for the Trojans and at the University of Michigan are those she relies on still as a doctor, director and Mom.

“My high school athletic experience impacts all areas of my life,” Taylor said. “I think about the journey of those experiences and how those changed me.

“The discipline and time management skills you have to have as a scholar-athlete, to pay attention to school and pay attention to your sport, those are certainly skills I carry with me today.”

Farm Bureau Insurance, which continues to sponsor the award program that has grown to 32 recipients. In advance of this March’s 25th celebration, Second Half is catching up with some of the hundreds who have been recognized.

Taylor advanced as far as the Lower Peninsula Class A No. 1 singles championship match during her high school tennis career, finishing runner-up at the top flight her junior season. She already had an interest at that point in health and an understanding of what went into playing at a high level, and was most interested in sports medicine and orthopedics when she began medical school, also at U-M.

But as she got a little deeper into her studies, Taylor discovered a path that seemed more in line with her personality.

A video bio of Taylor on the Spectrum Health website includes her explaining that she chose psychiatry because it’s an area that allows her to empower patients to help themselves. In her line of work, she not only heals but aspires to help those in her care reach their potential.

While at U-M, Taylor found a mentor in Dr. Michelle Riba, the director of the PsychOncology program at U-M’s Comprehensive Cancer Center. Her work, like Taylor’s at Spectrum, centers on treating patients in their dealing with the emotional issues that come with cancer diagnosis and treatment.

Taylor’s role as chief of psychiatry and behavioral medicine for the entire Spectrum system allows her to affect a patient’s entire care by making more accessible treatment for emotional and well as physical needs.

There are days she comes home after working with a patient facing especially somber circumstances, and through her medical training has learned how to keep those sad situations from affecting her personally.

But there also are days when she’s had to deal with a difficult managerial situation, and during those times she taps into the skills she learned while on the court.

"If I have a challenging colleague or someone with a different opinion in a meeting, I tap into knowing how to deal with adversity."

Taylor, 37, remains tied to a few from her Scholar-Athlete Awards class. She has known Okemos winner Andy Dhaliwal since childhood and he is now a doctor too, having also graduated from U-M. Jackson winner Harland Holman is a family physician in Grand Rapids and also part of the Spectrum Health system, and knew Taylor's husband through wrestling.

Karin is married to Dr. Joe Taylor, quite a former scholar-athlete himself – he was a standout wrestler at Charlotte before graduating in 1995 and going on to study at U-M.

Thanks at least in part to their parents’ inclination toward sports, the Taylor kids are beginning to try some out. The oldest is 9, the same age as when Kiran first picked up a tennis racket.

For this, Taylor also is prepared thanks to her high school and college careers. Considered together, they give her a long perspective when it comes to kids and sports.

“(It’s about) letting them figure out what they’re interested in, letting them explore. They want to pay attention to things or don’t; watching them unfold was fun,” Taylor said. “It’s about understanding the road, and that’s what high school athletics did, and going on into college athletics. They helped me understand it’s a long road. You don’t have to start your kid at 4 and have the best at 7.”

And it's a road she advises this year's Scholar-Athletes to appreciate now as they pick up knowledge they'll use for a lifetime. 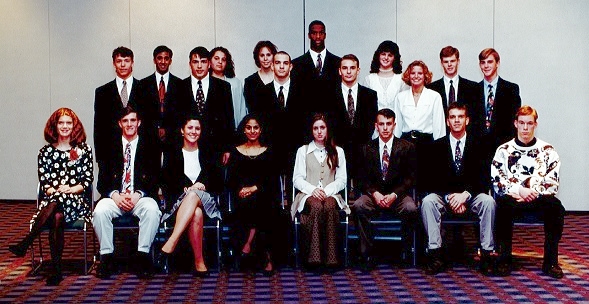