Maribeth Johnston’s description made it easy to imagine the bustling activity that was Janet Gillette’s Comstock Park athletic office for 20 years.

Gillette and her secretary’s desks, piled with shelves of labeled and color-coded binders. A wall-sized white board calendar marked with sports activities for the next two months. Floor to ceiling shelf units, labeled cubbies and a copy machine loaded with paper of various colors. Trophies on shelves awaiting their turn in the school’s display case.

And then there were the two most telling images of Gillette’s legacy during four decades as a part of Comstock Park schools. On other walls were hundreds of pictures of students, athletes, coaches and staff. And in the center of the athletic office were two large work tables, usually occupied by student volunteers stuffing envelopes, organizing and counting uniforms or taking any on other task to help out.

“Her attention to detail, service for others and devotion to make every event ‘special’ is what endears her to the people in our school system,” wrote Johnston, who recently finished her 24th season as the school’s volleyball coach, in a letter of recommendation for the MHSAA’s Women in Sports Leadership Award. “The athletic office is a wonderful place. But the person who makes it all happen is Jan Gillette.”

Gillette attended Comstock Park, came back as a teacher and coach, and retired in 2010 after spending her final 19 school years as athletic director. She is the 25th woman to be recognized with the WISL Award for exemplary leadership capabilities and positive contributions to athletics. The award will be presented during Sunday’s Women In Sports Leadership Conference banquet at the Lexington Lansing Hotel.

“One of my quotes that people always hear is there’s no greater privilege in life than to have an impact on a young person. I got to do that every day,” Gillette said. “And they impacted my life as well." 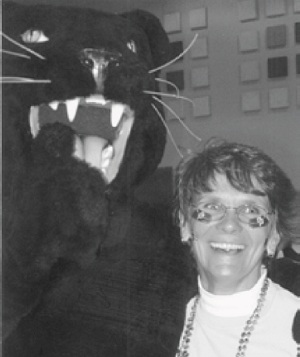 “Few administrators have such a long record of hosting MHSAA Finals, evidence again of Janet Gillette’s drive to contribute not only at Comstock Park, but to high school sports on a larger scale,” said John E. “Jack” Roberts, executive director of the MHSAA. “Her involvement with female athletics dates back nearly to their inception. Jan’s impact will continue to be felt for years to come, and her contributions set a high standard for administrators in the future. We’re proud to honor her with the Women In Sports Leadership Award.”

Girls sports have evolved the most since Gillette first joined the athletic scene. Back then, seasons were only eight weeks, and volleyball, bowling and softball were not yet sponsored by the MHSAA. “To see what we have now, it’s just awesome,” Gillette said.

In the community, Gillette has served as a coach in the Northwest Little League and been active with the Alpine Baptist Church as an AWANA Director and a Sunday School teacher.

“Mrs. G” hardly has disappeared from the school scene. She still manages the school’s volleyball tournaments and cheer invitationals, and the 250-person effort that makes the Division 3 Track and Field Final happen each spring.

She’s the first to credit all of those helpers, as well as the school boards, principals and superintendents who led the district during her career.

“I love Comstock Park. I love the community. I grew up there, and my dream was always to become a coach and a teacher,” Gillette said. “I didn’t want to do anything else because of the impact my teachers and the staff had on me, and the coaches.

“To go back to your own home town, what better could there be?”