The theme chosen by Portage Northern’s student section for its hockey Regional Final in 1989 was “Kings of the Ice,” and as such they wore Burger King crowns as a sign of the royalty their classmates soon would earn.

Just before team captain Cody Inglis accepted the championship trophy, he skated to his friends and was anointed as well as one placed a crown upon his head.

Golden cardboard and all, Inglis received his team’s prize and circled the ice.

Inglis returned home that night eager to discuss the highlights with his dad Bill, a former professional player and one-time coach of the NHL’s Buffalo Sabres. But there was only one thing Bill had to say – and it’s a principle that’s continued to guide Cody throughout his career in high school athletics.

“I was really looking for his input and congratulations, and he looked at me and said very succinctly, ‘There’s a right way and a wrong way to do things. And you chose the wrong way,’” Inglis remembered this week. “At the time, I couldn’t see it with the perspective of a 17-year-old kid. But now I look back on it as the most valuable life lesson I’ve ever gotten.

“I knew he was proud of me. But the lesson he was trying to impart on me was doing things the right way is much more important than winning.”

Inglis has been doing things the right way for two decades while serving first at Suttons Bay and then Traverse City Central High School. He’ll bring a winning list of achievements and wealth of knowledge when he joins the Michigan High School Athletic Association staff as an assistant director in January.

“We had more than 100 candidates, including a half dozen of the finest ADs in America – not just Michigan. They couldn’t be any better,” MHSAA Executive Director John E. “Jack” Roberts said. “Cody’s selection was based in part on his being just a slightly better fit to the job description we had in mind.

“He’s had to do some tough things as an administrator. But he’s got a personality that causes people to rally around him.”

Inglis’ dad, Bill, spent 50 years in pro hockey, most of his final 20 as general manager of the Kalamazoo K-Wings, and Cody grew up in lockerrooms around future pros like Ron Hextall, Dirk Graham and Marty Turco. When the Toledo Goaldiggers won the IHL’s Turner Cup when Cody was in sixth grade, he got to carry the cup through downtown. The family moved 17 times, and prior to the stop in Kalamazoo, Cody had never lived anywhere longer than 2½ years.

Inglis graduated from Portage Northern High School in 1989 and went on to Hope College, where he earned a bachelor’s degree in physical education and his teaching certification. He also was the captain of Hope’s 1992 men’s cross country team and captain of the men’s track & field team in both 1992 and 1993, and earned academic All-America honors for cross country.

Given his ties to pro hockey, Inglis might have had an opportunity to follow his dad. But it wasn’t for him. After graduating from Hope, Inglis enrolled at Western Michigan University to study sports management. He went to class for one day and withdrew – his heart just wasn’t into it. 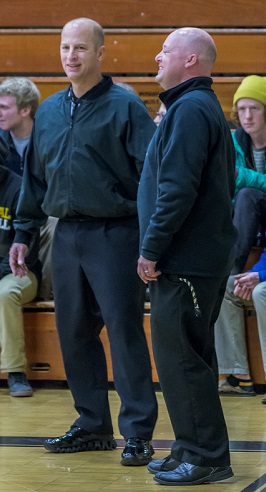 Instead, Inglis hooked up with his Portage Northern cross country coach Bill Fries and found what he did want to do – coach, and in doing so, teach athletics.

Inglis hooked on at Suttons Bay as a 23-year physical education teacher and head cross country and track & field coach, and two years later took over the athletic department.

“I was thrown into the fire right away, but I had a desire to be in sports somehow and coaching was a passion of mine,” Inglis said. “It was kinda sink or swim. I realized the craziness and hecticness of it, but it was something I embraced. I was lucky to have the opportunity to do it at Suttons Bay, to grow there and have people who were willing to let me make some mistakes, learn from my mistakes and become a better administrator.”

His programs have achieved plentiful success under his leadership. Traverse City Central won the Big North Conference all-sport award every year from 2008-12 and earned six MHSAA Finals team championships during his tenure. The varsity programs have produced 34 academic all-state awards over the past three school years – including 14 in 2012-13 – and 62 percent of the student body was involved in athletics last school year.

While at Suttons Bay, Inglis led an athletic program that won the Northwest Conference sportsmanship trophy nine times and earned two MHSAA Finals championships. He also redeveloped athletic boosters programs, oversaw construction projects and was instrumental in the rewriting of athletic policies at both schools.

He was recognized in the spring with the MHSAA’s Allen W. Bush Award, which recognizes those who serve in high school athletics but do not always receive attention for their contributions.

Inglis was instrumental in the creation and later served as an assistant coach for the Traverse City Bay Reps ice hockey team, a co-operative headed by Traverse City St. Francis High School that’s now been in existence 15 seasons. He also was named Division 4 Girls Cross Country Coach of the Year in 2002 by the Michigan Interscholastic Track Coaches Association after leading his team to a runner-up finish at the MHSAA Finals.

Inglis coached a string of girls cross country teams that made the top 10 at MHSAA Finals five straight seasons, plus 25 all-state athletes in cross country and track and field including three individual MHSAA champions.

Of little surprise, Inglis has been greatly impacted by growing up following his dad. While mother Jeris was the rock of the family, Bill was Cody’s idol and made a significant impact on the manager Inglis has become.

Inglis received minor degrees at Hope in business administration and communications, and has completed a number of courses toward a master’s in athletic administration from Ohio University.

He is married to Carrie (Ham) Inglis, an MHSAA Finals cross country individual champion for Big Rapids in 1987. They have three sons.