Longtime assistant director Nate Hampton has retired after 32 years on staff with the Michigan High School Athletic Association and 50 serving in education and educational athletics.

After 18 years working in schools, Hampton began his tenure as part of the MHSAA staff on Sept. 5, 1989, and his impact has been felt across many sports and subjects over the decades. He has served as the MHSAA’s administrator for the majority of its most-played sports – football, girls and boys basketball and girls & boys track and field – as well as serving as staff liaison to the MHSAA Athletic Equity Committee and Upper Peninsula Athletic Committee.

His longtime guidance will continue to be felt nationally as well. Hampton served multiple terms on committees for the National Federation of State High School Associations (NFHS), including the football and basketball rules committees. 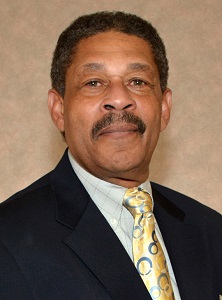 “Nate has been a giant in high school athletics in Michigan over half a century and through eras that have seen the shaping of school sports as they’re played today,” MHSAA Executive Director Mark Uyl said. “The knowledge and leadership he’s provided locally, statewide and nationally has benefitted thousands of athletes and their families, both in how educational athletics are administered on the field and off.”

Hampton is a 1966 graduate of Detroit Eastern High School. He went on to earn his bachelor’s degree from Morgan State University (Md.) and a master’s from Eastern Michigan University.

Prior to joining the MHSAA staff, Hampton taught and coached one school year at Dearborn Heights Robichaud High School followed by 15 years total with the Highland Park School District where he coached three sports, taught and served as athletic director during his tenure. In 1987, Hampton began as supervisor of athletics and physical education for the Saginaw Public School District, where he was responsible for all phases of the athletic programs for both high schools, five middle schools and 24 elementary schools.

Hampton also served on the MHSAA Representative Council prior to joining the staff.

The majority of Hampton’s duties have been assumed by recently-hired assistant director William McKoy, who joined the staff earlier this month after previously serving as athletic director at Romulus Summit Academy North.