By Geoff Kimmerly
Special to Second Half

Mark Uyl's impact on educational athletics has stretched from his hometown across this state and our country as a teacher, coach, administrator and one of the nation's most respected voices in sport officiating.

The Caledonia native and assistant director for the Michigan High School Athletic Association over the last 14 years is now charged with leading the Association as it continues in the work he has championed for two decades.

Uyl, 44, has been selected as the next executive director of the MHSAA by its Representative Council. He will succeed retiring Executive Director John E. “Jack” Roberts in August. Roberts, who has served as executive director since the fall of 1986, announced his retirement April 24.

Uyl joined the MHSAA staff in January 2004 and coordinates the Association’s nearly 10,000 officials in addition to serving as director of baseball and administrator of the MHSAA’s catastrophic and concussion care insurance plans. He also has served as director of cross country and wrestling during his tenure.

As assistant director, Uyl was instrumental as the MHSAA became the first state high school athletics association to offer concussion care insurance, which provides gap coverage to assist in covering costs for athletes who are injured while participating in MHSAA-sponsored sports. As an official himself, Uyl has worked to build a stronger relationship with those working high school events that has included an increase in training and support. As a sport director, Uyl has sought to create the best experiences for Michigan high school teams, including with the move of the MHSAA Baseball and Softball Finals to Michigan State University in 2014.

“The foundation built here by Jack Roberts over the last 32 years is the strongest in the country, and I’m honored to have the opportunity to lead our staff in building on that foundation,” Uyl said. “There will be many ways we’ll continue to protect the same values of educational athletics, while also looking for new ways and new opportunities to best serve the students and our member schools in Michigan.”

In addition to his full-time MHSAA duties, Uyl has officiated collegiate baseball since 1997 and is regarded as one of the best at that level. In addition to umpiring major conference baseball all over the United States, Uyl was part of the crews for the 2014 and 2017 College World Series. He also officiated college football for 12 years with several NCAA postseason assignments, and did serve as coordinator of officials for the Michigan Intercollegiate Athletic Association. He was registered with the MHSAA for at least three sports beginning in 1992 and worked the Baseball Finals in 1999.

Additionally, Uyl served on the board of directors of the National Association of Sports Officials (NASO) from 2012-15 and as its chairperson during his final year. Currently, he serves as the high school representative on the Officiating Development Alliance (ODA), which consists of the supervisors of officials for the NFL, NBA, MLB, NHL, CFL, MLS and NCAA Division I sports.

“Mark has spent the past 14 years as a highly effective assistant director for the MHSAA,” said Representative Council President Scott Grimes, who serves as Assistant Superintendent of Human Services for Grand Haven Area Public Schools. “He is a proven leader in the organization committed to providing outstanding service to both internal and external constituents. The positive relationships he has fostered with school administrators will help make this a very smooth transition.” 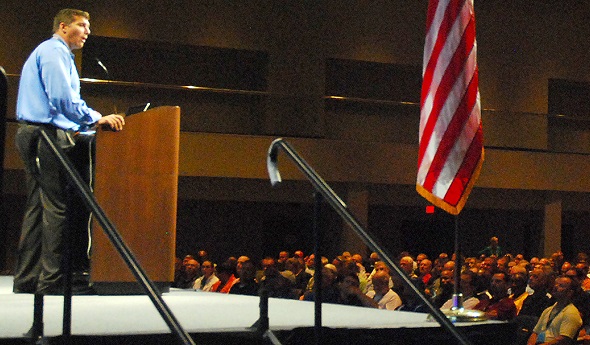 During his tenure as an assistant director at the MHSAA, Uyl also served a four-year term on the Baseball Committee for the National Federation of State High School Associations (NFHS).

“Mark was the obvious choice to become the next executive director of the MHSAA,” Roberts said. “Mark has the proper student-focused perspective of educational athletics, excellent person-to-person communications skills and a deep practical understanding of what is happening day to day in school sports in our state and nationally.”

Uyl graduated from Caledonia High School in 1992, and from Calvin College in 1996 with a bachelor’s degree in history and physical education. He later received a master’s in educational leadership from Grand Valley State University. At Calvin, Uyl was a four-year starter on the baseball team, earning all-conference honors twice and serving as team captain.

Uyl resides in DeWitt with his wife Marcy, an accomplished educator and coach who has served as a high school varsity basketball coach since 1994. They have three children: Jackson (17), Grant (15) and Madison (11).

The MHSAA is a private, not-for-profit corporation of voluntary membership by more than 1,500 public and private senior high schools and junior high/middle schools which exists to develop common rules for athletic eligibility and competition. No government funds or tax dollars support the MHSAA, which was the first such association nationally to not accept membership dues or tournament entry fees from schools. Member schools which enforce these rules are permitted to participate in MHSAA tournaments, which attract more than 1.4 million spectators each year.