When Marc Crossman was attending middle and high school at Benzie Central, he didn’t attempt a shot. He never blocked a shot either.

For that matter, the 2019 grad was never charged with a foul or a violation, nor credited with an assist.

Today, he uses the fitness he’s kept up from his track and cross country days at Benzie to call fouls and violations.  And, nearly every day, he assists high school boys and girls on basketball courts all over Northern Michigan.

Crossman is one of very few young MHSAA basketball officials in the north. He is also among a handful of father-son basketball and other sports officials calling Northern Michigan home.

“I tell you what man, I was probably the most dedicated fan in high school,” he said.  “I went to all the home games. All the away games, boys, girls.

“When I was in high school, I was obsessed with the game of basketball.”

Crossman did play elementary basketball. He tried out for the Huskies middle school team but wasn’t chosen.

“That was the end of my basketball career,” proclaimed Crossman, who also officiates football.  “And then it started up again when I was a junior when my dad (Don) roped me into the whole legacy thing with officiating. 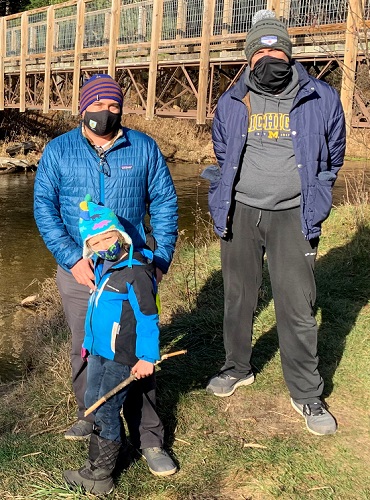 The Legacy Program pairs a student with a mentor official, which can be set up through direct contact with an official the student knows, or with help from the student’s athletic director in making contact with a local approved officials association. Lucky for Crossman, he did know someone, his father Don, an assignor for the Northern Michigan Sports Officials Association.

Don is a nine-year veteran official registered in baseball, softball, volleyball and football. He’s aware of the severe shortage of officials in general, but keenly aware most officials are closer to retiring than starting on the hard court. He’s enjoyed working with his son and assigning him with others.

Tom Post has been a registered official for 48 years and honored with MHSAA Finals assignments. John O’Hagan has 36 years of basketball experience and registered for baseball and softball spanning two decades.

All of those fathers and sons indicate they enjoy working together and with other partners, but note officiating comes with some challenges.

Most come from fans and coaches rarely seeing a young referee in the crew.

“There have been a few games where the coaches just seem to get in his (Jayden’s) ear more than the experienced official,” said his father.  “My fear is that Jayden — and all other referees — might one day say ‘I had enough of getting screamed at all the time and want to quit.’

“We talk to coaches, we explain their youth and that we are teaching and trying to recruit more young officials,” John O’Hagan continued.  “Recruiting is difficult enough encouraging people to get registered; however, when the coaches and fans simply forget it is just a game, that we are human and we will make mistakes, their behavior can deter folks from becoming a referee.”

With ongoing support and teaching from his father and regular partner Dave Nemecek, Jayden is excited to hit the court after his days as a college student.

“My dad has taught me everything I know when it comes to the game and rules side of it,” noted the 19-year-old O’Hagan. “He’s always watching me and having me do certain things to make sure that I’m doing the best I can.

“So when there’s nights I’m just not having it or am not doing good, he makes sure to let me know,” he continued. “He always keeps me on top of my game.”

“It is awesome, very cool,” he said. “It is fun to see him grow. It is a challenge for me to help him grow.” 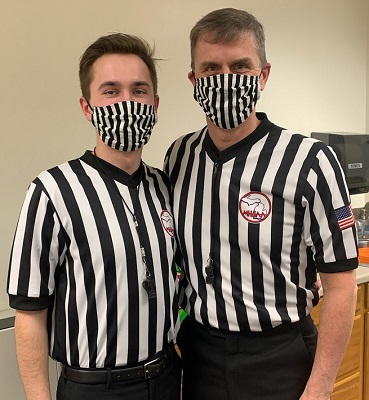 Ben Post is among a significant number of Northern Michigan referees not officiating during the current pandemic. He had been on the hard court every year since graduating from college and starting to teach at age 24 in 2004.

“I absorbed his (my father’s) officiating philosophy pretty much through osmosis, and as a result we call a pretty similar game, although I have no hope of matching his competence or consistency,” Ben Post pointed out.  “My dad is most in his element while working a game, and I’ve cherished every opportunity to watch and study him in that element, first as a fan and then while working alongside him.”

The pandemic has younger northern referees like Gabriel Wise, Gabe Janowiak, Brandon Nichols, Marc Crossman and Jayden O’Hagan perhaps finding themselves in tougher assignments than they anticipated this early in their careers.

“Now you’re in it,” Don Crossman said of the opportunities taken on by the younger refs.  “You’ve proved yourself on a fast track.

“You’re just one of the guys now,” he continued.  “It is real exciting.”

Younger referees are becoming a welcome site nowadays for coaches and athletic directors.

“When a crew comes to the gym and there are officials of varying ages, the diversity provides credibility to the crew as a whole,” said Steve Graetz, Benzie’s athletic director.

Graetz is filled with pride when he sees the youthful Crossman on the court, especially knowing he started doing many middle school games at Benzie in the Legacy Program.

“It was a safe environment in which Marc could learn the craft,” Graetz said. “To see him now regularly officiating high school games at varying levels on a regular basis speaks as much to the hard work he has put into learning and improving as it does to the accommodating format and structure of the Legacy Program.”