By Mike Spencer
Special for Second Half

The longtime Michigan High School Athletic Association referee was not tossing up another ball to start the Dec. 17 contest with visiting Cadillac, but she was nonetheless the center of attention.

The Northern Sports Officials Association, and St. Francis athletic officials, honored Beckett for her decades of officiating service at halftime. A 34-year official and longtime president of the NSOA, she received plaudits, a trophy and a bouquet of flowers.

“To be recognized by your peers is probably the greatest thrill that one could hope for,” Beckett said. “It was a totally unexpected and humbling experience.

“I could never give back as much as the NSOA has given to me. And looking up and seeing a sea of officials and generations that I had officiated in my career was amazing.”

"Barb has been instrumental in mentoring, developing, and coaching officials to be the best they can be,” said Bill Parker, who succeeded Beckett as the association’s president earlier this year. "She has always had a great passion for high school sports and her way to stay involved has been officiating and as a leader in NSOA."

Parker said honoring Beckett was a great way to show her that the NSOA appreciated her efforts.

“When someone devotes so much time to an association, it is great to acknowledge their contributions,” Parker said.

Beckett is well known in statewide officiating circles. The first woman to officiate an MHSAA Boys Basketball Final (1995) was awarded the MHSAA’s Vern Norris Award in 2000 and Women In Sports Leadership Award in 2013.

“Barb has been a true pioneer in what she, along with the other leaders of the Northern Sports Officials Association, has been able to accomplish in areas of recruiting, training and retaining sports officials,” said MHSAA assistant director Mark Uyl, the association's director of officiating. “At her core, Barb is a people person. The relationships that she has built with fellow officials, school administrators, coaches and student-athletes have been exemplary.”

Uyl said he was not surprised to see Beckett honored by her fellow officials. 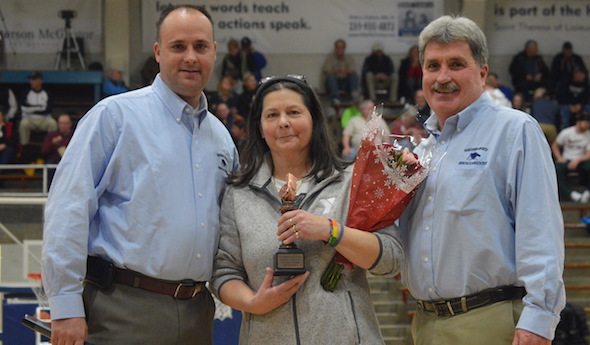 “It’s a true testament of the kind of person Barb is,” Uyl said. “She has blazed an incredible trail as a leader in high school officiating. We need more people like Barb that are true advocates and supporters of those that are officiating games in school sports.”

Although Beckett turned in her whistle more than a decade ago, she is still involved in the NSOA as an assignor, advisor to the board and mentor.

“I knew many years ago that I was here to serve,” said Beckett, who also has been the program director for the Grand Traverse Bay YMCA. “I have been able to fulfill that life expectation of myself.”

Beckett, who officiated numerous high-level basketball and softball tournament games, said getting the association to assign games through a web-based system and getting officials better trained are two major accomplishments from her presidency.

“The assigning system has completely changed the way in which we operate and so has the training,” she said. “We emphasize the importance of educating and we wanted our officials to have the best and most comprehensive rules, mechanics and game-situation knowledge of anyone in the state.”

Beckett said she got into officiating just like a lot of others because she thought she could make a difference and do better than those that she had watched.

Beckett said working her first MHSAA Softball Final and the Class C Boys Basketball Final were among her officiating highlights.

“The boys Final was the best experience ever,” Beckett said. “I didn’t get any sleep the night before the game and I was never comfortable with all the attention of being the first female to work a boys Final.

“I saw myself as being just another official, not a female official.”

Beckett said she’s always had the “greatest partners ever,” and “they made me look way better than I actually was.” Among the greats were Joe Lemieux, Tom Post, Kenny Allen, Scott Jones, Clint Kerr and “many more, too,” she added.

As far as accolades, Beckett said she’s not a fan of self-recognition nights. But she’ll remember the cold, snowy winter night of Dec. 17, 2016.

“I like casual and homey nights like that,” she said. “My NSOA family was there with me so it was extra special.

“It’s a bond that we have as officials. We are all brothers and sisters.”

PHOTOS: (Top) Barb Beckett stands along the sidelines with her trophy and bouquet of flowers after the ceremony in her honor Dec. 17 during halftime of the Traverse City St. Francis boys basketball game against Cadillac. (Middle) Northern Sports Officials Association members, from left: president Bill Parker, assignor and mentor Barb Beckett and secretary Mark Stewart. (Photos by Mike Spencer.)