“The Official View” has received significant positive feedback, from both officials and non-officials – and we thank you for your interest in learning more about this essential avocation.

This week, we discuss a promising effort to recruit Legacy officials and another “get-to-know-you” opportunity at MHSAA Sportsmanship Summits, plus dive into rules scenarios in volleyball and swimming.

MHSAA officials will be presenting over the coming weeks at the annual Sportsmanship Summits held around the state. Renewed focus will be concentrated on the effect that poor sportsmanship has on the challenge of recruiting and retaining officials. Discussions will be led by noted officials in those areas to allow students to discuss the concerns and solutions to these issues.

Improving sportsmanship is a priority of the MHSAA Officials Program, and officials should be looking for new initiatives to support this goal. They include new policies on protecting officials, providing schools with framework to institute a Game Day Ambassadors Program, “Official Thanks” nights and several others.

Some efforts already have proven successful. “The Official View” continues to serve its purpose in humanizing the folks that officiate MHSAA contests. On that note, keep sending those photos and stories to brent@mhsaa.com for features in The Official View. Ideally, submissions will be for in-season sports and include photo(s). Don’t forget to add the who, what, where, and when.

Ruling: This is an illegal serve and loss of rally/point. The re-serve privilege was used up by A1 since this was during A2’s term of service.

SWIMMING In the clip, the swimmer in Lane 5 begins to stray in her backstroke and ends up incidentally contacting the lane divider. She ultimately continues and wins the race. What’s the call?

Last Week’s IYC Ruling: In the clip, as the attacker and the keeper approach the ball, the attacker strikes the keeper’s ear. Since this is outside of the penalty area, a direct free kick would be awarded and the attacker would be assessed a yellow card. (Click to see last week's video.)

Official View: We’re All in This Together

The MHSAA Legacy Program has produced some terrific officials since its inception in 1992, many of whom are still officials today. We feel that recruiting eager and qualified officials is a collective partnership between the MHSAA, schools and officials associations around the state. 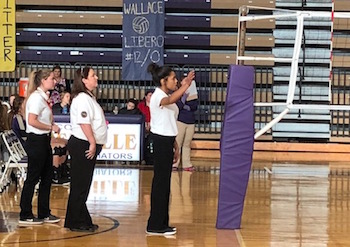 For our part, the MHSAA offers a reduced registration fee for enrolled-student officials to get them started into officiating. We suggest that the schools and associations further alleviate these new officials from their startup costs by taking on this reduced fee. Schools benefit because they can then utilize these officials’ services at middle school and junior high school contests, and associations benefit because they are able to add a new official to their rosters for years to come.

Fowlerville has taking the lead in this area by recently hosting a Legacy clinic where veteran officials were paired with newly registered (paid for by Fowlerville Schools) Legacy officials and assigned to a volleyball match with local middle school Red Cedar League teams. This event allowed experienced mentor officials to provide on-the-spot constructive feedback in live game scenarios.

Other schools are following suit by hosting clinics and other events to draw new officials into the fold, including adding curriculum in officiating to next year’s course load. Schools interested in adding officiating to their curriculum can contact Brent Rice of the MHSAA for a curriculum outline and guides to make it a success.