Statistics tell us poor sportsmanship is a leading factor in officials leaving officiating and a major impediment to recruiting new officials. The official catching flak is not new.

This week’s “It’s Official” discusses work being done to bring civility to high-intensity situations where criticism of officials has frequently turned personal.

Poor Sportsmanship and the Official

As long as there have been officials, there has been dissatisfaction with officials by players and coaches. It’s not that instances of poor sportsmanship are becoming more frequent – it’s that these instances are becoming more personal. And in part because of the accessibility of social media, they are more sensationalized.

The great Major League Baseball veteran umpire Harry Wendelstedt regularly used to say, “You may yell at the uniform, but you can’t yell at me.” His point recognizes not everyone will agree with the calls officials make, but that criticism and disapproval should be directed about the call and not about the person.

Some sports have ejectable offenses specific to that sport. Others – think soccer, volleyball, basketball or football – have a progressive system of fouls that lead to an automatic ejection. This doesn’t mean, though, that coaches and players receive a one-time free pass to say whatever they want. Personal attacks are not permitted and are grounds for immediate disqualification. Personal attacks include:

• Threats or intimidation of physical violence, withdrawing games or a downgrade of ratings.

• Personal insults that disparage an individual or openly question an official’s integrity, impartiality, honesty or character.

For example, instead of using the personal insult “You’re terrible!” that would result in an immediate ejection, players and coaches could substitute the impersonal “That’s terrible!” The use of “you” or “you’re” personalizes the attack, and anything that follows those words in a disparaging manner almost always will result in a disqualification.

While the onus of ensuring good sportsmanship is primarily the responsibility of administrators, coaches and players, the officials also play a significant role by enforcing behavior and conduct rules through penalization. Officials are being instructed to strictly enforce this policy moving forward. To emphasize the importance of avoiding personal attacks on officials, the MHSAA will be starting the new campaign “Get Personal … Get Ejected!” We are looking for help from coaches, players and spectators in showing respect and appreciation for the hardworking men and women who officiate MHSAA contests by keeping criticisms brief and absent of personal attacks. 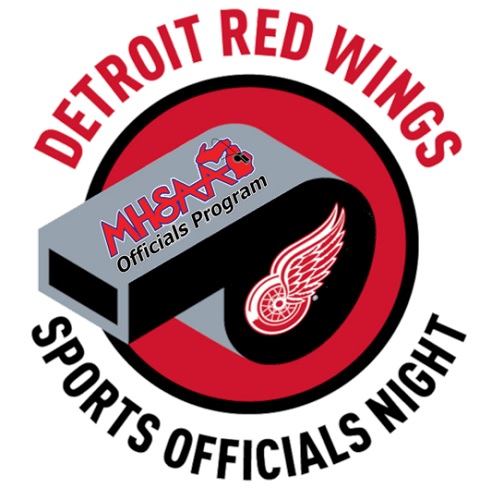 The MHSAA is seeking ways we can show appreciation for the contribution Registered officials provide to the MHSAA and its member schools. This will soon include the introduction of an “Official Thanks” campaign and providing schools a framework to institute “Officials Appreciation” events.

To further express our gratitude, the MHSAA has partnered with the Detroit Red Wings to host a Sports Officials Night on Sunday, March 31 beginning at 7:30pm. The package includes a specially-priced Red Wings ticket, souvenir cooling towel and access to a pre-game speaking engagement with former professional officials. Additional benefits also are being worked on. Details are posted on the Officials page of the MHSAA website and will be delivered to all officials via email.


Rule of the Week

GIRLS COMPETITIVE CHEER As Team A attempts a swinging stunt during Round 3, the flyer is propelled into an almost-vertical position with her feet in the air and head near the floor.

Ruling: This is an illegal stunt and an 8-point deduction per infraction.

BASKETBALL This week’s clip shows Team A in white attempting to move the ball up court against Team B’s press. A pass is made to #11 near the division line. What’s the call?

Last IYC Ruling: In the last “It’s Your Call” clip, the attacking wrestler picks up his opponent and slams him to the mat. This is a dangerous act, and a flagrant misconduct should have been assessed. (Click to see video.)

Every year, the Macomb County Coaches Association and area officials come together to host a Christmas Tournament where funds are raised for educational scholarship opportunities. This year’s event was another huge success.

For officials, it’s a great time to give back and enjoy the sport they love. Tradition has been that custom uniform shirts are purchased for the officials, who also wear their best (or worst) pair of Christmas socks.