This week we honor our first “Official of the Month” – Rockford’s Lyle Berry – and offer a reminder on postseason invitations while also taking a look at a few situations officials may encounter in volleyball and football.

Postseason tournament officiating invitations have been released in all of our fall sports. Make sure if you were selected to get your acceptance/declination confirmations in as soon as possible. If we fail to receive an acceptance for the position, we will have to remove your name from the consideration list for this season.

VOLLEYBALL Team R’s first contact is an overpass that lands on top of the net and settles briefly. Team R’s backrow setter, while still standing on the floor, reaches up and taps the ball to the floor on Team S’s side of the court.

FOOTBALL The old Swinging Gate. There are a number of fouls on this play. Which do you see?

Last Week’s IYC Ruling: Player #4 in white commits two fouls on the play. First, he make an illegal block below the waist in order to take out the lead block by the pulling guard. Then, as the running back scrambles to look for more yards, #4 returns to the pile and makes illegal helmet contact (spearing) with the runner. Both are live ball fouls with 15-yard penalties. They both occur at about the 22-yard line where the run ends, so either could be accepted/declined for the same result. (Click to see the video from last week.)

The Official View - Official of the Month

After 59 years as an MHSAA registered official, Lyle Berry says his time wearing the emblem is winding down. “I’ll believe it when I see it,” his wife regularly reminds him.

Even though Lyle hasn’t been on the hardwood serving as a basketball referee since 1988, he has remained a staple in cross country and track & field meets across the state. The 2012 Vern Norris Award winner, Berry has been honored by serving as an official in 17 MHSAA Finals.

“If you’ve never stood at the finish line to watch two athletes give everything within themselves to be the first to cross, you have missed the boat,” said Berry as he provided his best example of the ABC-coined phrase, “The thrill of victory and the agony of defeat.” 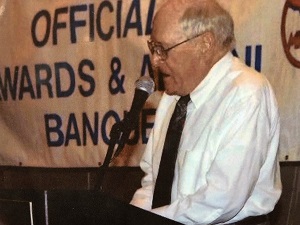 It’s working with young people that has kept him coming back year after year. And not just the competitors – Lyle has had the privilege of starting many officials on their way and enjoyed the thrill of seeing them grow and succeed.

But for all of his officiating accomplishments, they don’t compare to that spring day in 1959 when he married the love of his life, Vonna.

Prior to getting married, Lyle was a seven-time letter earner in three sports while attending Grand Rapids Central High before attending Grand Rapids Junior College. He was the first at that school to earn four letters in one year before moving on to Central Michigan University, where he played baseball. Together, Lyle and Vonna raised three sons who all proved to be good athletes as well. He served as a teacher and coach at four schools until his retirement in 1991. Through it all, Vonna has been at Lyle’s side, encouraging him to reach for his goals in athletics and officiating.

He got his start in officiating by serving in the college intramural program. He learned quickly that it wasn’t easy as he had imagined during his early days of playing sports. He credits his longevity to his love of sports and remaining involved in them. It certainly wasn’t the $1.50 he made in his start in basketball refereeing!

Lyle Berry is a shining example of what the MHSAA looks for in its officials: Dedicated and hardworking men and women who desire to make a positive impact on the next generation of student athletes. The privilege, Lyle said, is one that he “would do most anything to have continue for many years to come.”

It’s our privilege, Lyle, and we wish you many more years of continued success in officiating.