As “Official View” returns this week, we say good-bye and a big thank you to a longtime football official – but only for the fall as he’ll be continuing to serve on basketball courts in southwestern Michigan.

We also consider a few soccer scenarios and explain changes on the way at MHSAA.com designed in part to provide more resources for officials.

The use of regular bulletins for officials in each sport was rolled out for this past fall season in football, soccer and volleyball. Each of these weekly bulletins provides readers with a few topical items (rules and mechanics) which includes common issues observed, points of emphasis or tips, and hints. It also provides a rules challenge and other tidbits of beneficial information in the specific sport. Full implementation of this tool will be started this winter in basketball, competitive cheer, gymnastics, hockey, swimming and wrestling.

Expect to see some changes in the coming weeks to the Officials page of the MHSAA website. The primary goal of this revamp is to reduce redundancy, separate and organize general officials information from sport-specific information and provide a new resource area for each sport’s officials to receive bulletins, approved rulings and interpretations and to access the new video rules library currently in development. If there are specific things you would like to see included, please let assistant director Brent Rice know.

SOCCER During A1’s throw-in, the ball first hits the touchline and then continues immediately out of play.

Ruling: This is a legal throw-in and Team B will be awarded a throw-in at the spot at which the ball left play.

SOCCER This week’s clip has the attacker in white and defender in blue racing to retrieve a ball headed near (but just outside) the penalty area. The goalkeeper charges and both he and the attacker attempt to make a play on the ball. What’s the call?

Last Week’s IYC Ruling: Last week we were presented with a prime example of how not to run the “Swinging Gate” formation from scrimmage. The play had a number of potential fouls – let’s run through them (click to see the video):

• Illegal formation – Snapper’s shoulders must be squared to the line of scrimmage.

• Illegal formation – It appears only the snapper is on the line of scrimmage. This leaves 10 in the backfield.

• Illegal shift – While the cluster of players are attempting to get set, the near receiver goes in motion. The ball is snapped without having all 11 set for at least one second.

• False start – The back that receives the snap starts to move before the snap.

Official View: A Step Back 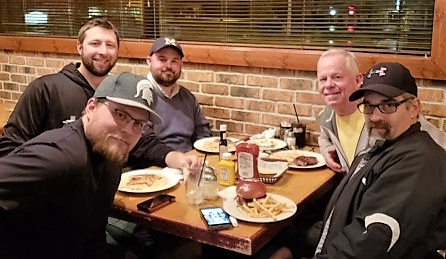 For the last 42 years, Wayne Patterson has roamed the high school gridirons serving as a strong, hardworking and dependable official, crewmate and mentor to young officials. Patterson has decided that after years and years of fall Fridays blocked on the calendar, it’s time to spend more time with his family and allow other officials to take his place.

It’s not a step out though, only a step back. He will continue to officiate both boys and girls basketball in the winter, working alongside his daughter.

In the adjacent photo, Patterson sits with his regular crew for a postgame meal and discussion. The crew took the top photo together during his final career football game, at Sturgis High School. (Top photo, from left: Mitch Reynolds, Pete VanGeisen, Wayne Patterson, Tim Latta and Mike McKenzie).