In this week’s “Official View” we explain the important of insurance and offer a brief primer on how the MHSAA helps officials stay covered.

We also work through some rule scenarios in football, volleyball and swimming and take a look at a few of the wintery scenes braved not only by teams on the field and fans in the stands but officials in stripes as well.

Most officials will go their entire lives without needing to utilize insurance coverage for something that occurred while officiating. In the often rough-and-tough world of school sports, though, the need for officials to protect themselves on and off the field has never been greater. While officiating is not considered a dangerous avocation, officials should prepare themselves for those one-in-a-million situations.

There are a variety of coverage options out there for officials, ranging from medical and loss of income coverage due to injuries sustained while officiating to liability coverage and legal fees. Officials, individually and through their associations, can purchase increased coverages that suit their needs.

The MHSAA continues to look out for the best interests of our registered officials in this area and in other ways. When officials annually register with the MHSAA, they are included in both a comprehensive liability plan and catastrophic medical coverage for incidents that occur during MHSAA contests. Major injuries due to officiating are rare, but it is nice to have the security that you’re covered in the event of some tragic event. Though the few lawsuits that officials are a party to are often summarily dismissed, the MHSAA’s liability coverage kicks in at dollar one, including any legal fees or attorney retainers.

We will be seeking your feedback in how we can best serve these interests as they pertain to increased insurance coverage, training and development and providing additional useful resources. We thank you for your input and continued commitment and dedication to the MHSAA and the Officials Program.

Ruling: The ball is dead at the moment the muffed kick is possessed by Team K. The ball cannot be advanced. It will be 1st-and-10 for Team K on R’s 35.

VOLLEYBALL This week’s clip shows a back row player for Team S making a back row attack and then landing on the attack line. What’s the call?

Last Week’s IYC Ruling: Last week’s video shows a swimmer drifting into the lane divider before ultimately finishing first in the meet. This incidental contact with the lane divider is legal since she did not grab ahold or otherwise use the divider to pull herself through the water. (Click to see last week's video.)

The first day of winter is scheduled for Dec. 21, but you wouldn’t know that by the weather from this past weekend’s football games. 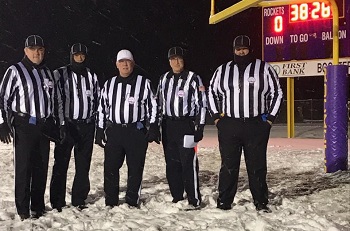 Snow covered most of the state Friday and Saturday, even causing some teams to play in a couple of inches of the falling white stuff. Just like our teams, the officials braved the cold and flurries to ensure another great week of MHSAA football.

The photo above and to the right is from the 8-Player Semifinal between host Rapid River and Cedarville. The crew, from left: Joel Mitrzyk, Mark Pieniozek, Jan Viliquette, Paul Binder and David Paananen.